Saturday we drew the line. Some 800 people came together from across the region including Vancouver (WA), the Tri-Cities, Astoria, Eugene, Bellingham, Vancouver (BC), Seattle, Portland and Hood River to demonstrate our unity in opposition to the oil, coal and gas terminals proposed throughout the Northwest and our commitment to take action such that none shall pass through our region.

We gathered on the Columbia because our communities and our climate cannot afford any expansion in polluting fossil fuel infrastructure. 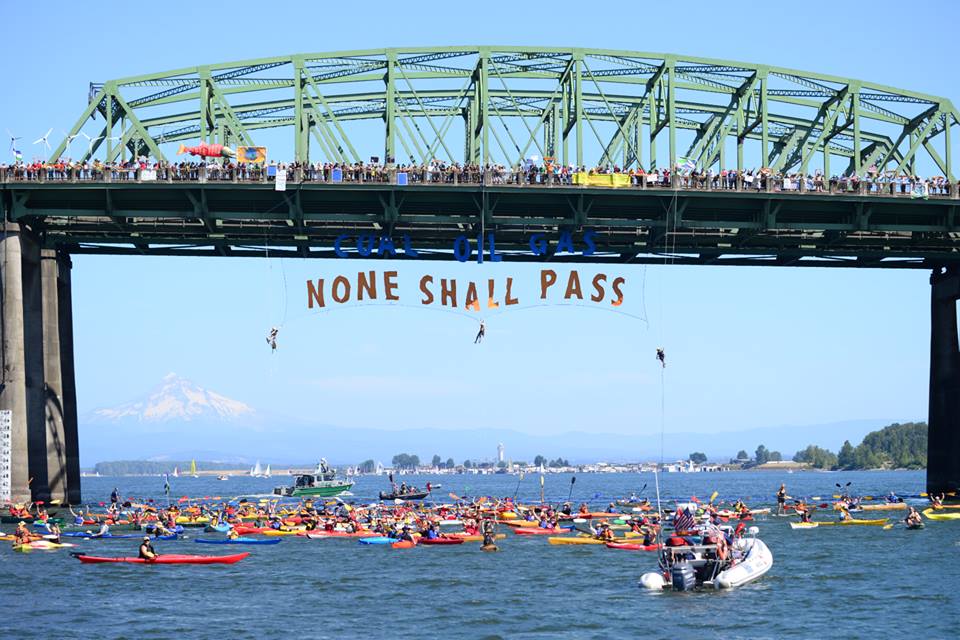 We took action Saturday because we know it is our moral responsibility to take a stand and halt projects that aim to turn the Pacific Northwest into a dirty fossil fuel corridor. Our region is poised to play a pivotal role with projects that could release hundreds of millions of tons of carbon into the atmosphere every year. And if we stop these terminals that means they can’t ship it. And if they can’t ship it, they can’t sell it. And that means it stays in the ground.

Saturday was just a beginning. We symbolically blockaded the river to demonstrate our willingness to participate in nonviolent civil disobedience and direct action to prevent these terminals from being constructed should they move forward anywhere in our region. I hope you feel like Jeanne Poirer, from Cashmere, Washington who stated to the Oregonian, “I’ll be back for the real thing”.

If you are interested in learning more about participating in nonviolent civil disobedience and direct action with Portland Rising Tide, please let us know by filling our this short form: portlandrisingtide.org/2013/07/nvda-sign-up/

It was inspiring to be with all of you who were present on Saturday. We could also feel the presence of the thousands of you who weren’t able to join us. We are mobilized and united as a region against these fossil fuel terminals. We are committed to taking action to address the climate crisis. Together we can stop them! Φ

David Osborn is currently primarily involved in the climate justice movement with Rising Tide North America and Portland Rising Tide. He is also a board member of the Portland Central American Solidarity Committee and a co-founder of the Rose City Trainers Guild. Osborn is an instructor at Portland State University where his work focuses generally on social movements, culture, social change, and narrative as well as specifically on radical environmental movements and the processes and structures of social movements.