WASHINGTONâ€”A proposal under consideration at the White House to reverse decades of U.S. nuclear policy by declaring a â€œNo First Useâ€ protocol for nuclear weapons has run into opposition from top cabinet officials and U.S. allies.

The opposition, from Secretary of State John Kerry, Secretary of Defense Ash Carter and Secretary of Energy Ernest Moniz, as well as allies in Europe and Asia, leaves President Barack Obama with few ambitious options to enhance his nuclear disarmament agenda before leaving office, unless he wants to override the dissent.

The possibility of a â€œNo First Useâ€ declarationâ€”which would see the U.S. explicitly rule out a first strike with a nuclear weapon in any conflictâ€”met resistance at a National Security Council meeting in July, where the Obama administration reviewed possible nuclear disarmament initiatives it could roll out before the end of the presidentâ€™s term.

During the discussions, Mr. Kerry cited concerns raised by U.S. allies that rely on the American nuclear triad for their security, according to people familiar with the talks. The U.K., France, Japan and South Korea have expressed reservations about a â€œNo First Useâ€ declaration, people familiar with their positions said. Germany has also raised concerns, one of the people said.

Mr. Carter raised objections to the â€œNo First Useâ€ declaration on the grounds that it risked provoking insecurity about the U.S. deterrent among allies, some of which then could pursue their own nuclear programs in response, according to the people familiar with the discussions. North Koreaâ€™s nuclear ambitions and Russiaâ€™s actions in Europe have also complicated any change to the U.S. nuclear posture for the Pentagon.

Mr. Moniz, who weighs in on nuclear issues for the Department of Energy, also expressed opposition to a â€œNo First Useâ€ posture, according to a person familiar with the discussions.

Mr. Obama ultimately didnâ€™t issue a decision on the â€œNo First Useâ€ proposal at the National Security Council meeting, but people familiar with the White House deliberations say opposition from the critical cabinet members and U.S. allies reduces the likelihood of the change. They say a decision by Mr. Obama to press ahead with the declaration appears unlikely in his remaining months, given the controversy it would stir in the midst of a presidential election, but it isnâ€™t impossible.

Other possible initiatives the administration has discussed also have met opposition, including calls to roll back a planned modernization of U.S. nuclear forces and proposals to reduce the U.S.â€™s deployed nuclear weapons without a reciprocal pledge from Russia.

The Defense Department previously said it wouldnâ€™t pursue any reductions in the number of deployed nuclear warheads without an agreement on reciprocal action from the Kremlin.

The result is that policy work the White House launched last year to develop nuclear disarmament initiatives for Mr. Obamaâ€™s final months in office may end up limited largely to actions at the United Nations, where Mr. Obama plans to make nuclear issues a focus of his final speech to the General Assembly next month. The speech comes on the 20th anniversary of the Comprehensive Nuclear Test Ban Treaty, which bars nuclear explosions. The U.S. signed the treaty in 1996, but the Senate hasnâ€™t ratified it. 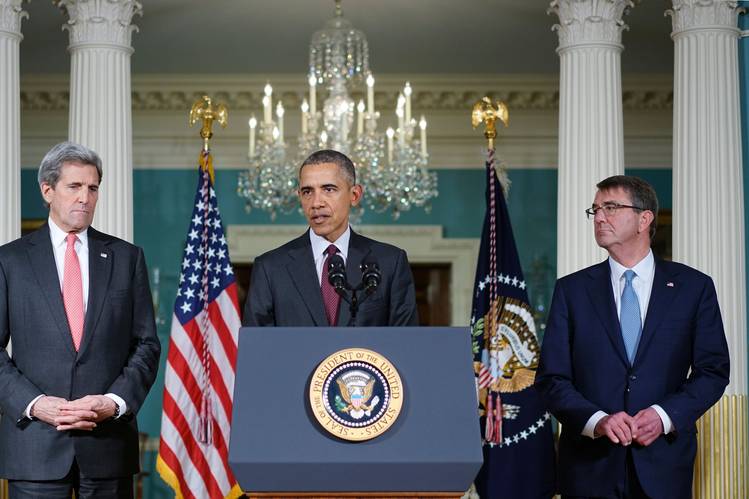 National Security Council Spokesman Ned Price said the U.S. has begun engaging members of the U.N. Security Council on steps to strengthen the detection architecture for nuclear explosions and support national moratoria on nuclear tests. He said the administration wouldnâ€™t undercut the test-ban treatyâ€™s prospects for U.S. ratification. Itâ€™s unclear if the effort will lead to a formal resolution.

â€œThis administration is not proposing a U.N. Security Council resolution that would impose any legally binding prohibition on nuclear testing,â€ Mr. Price said. The White House is also looking into the possibility of a statement from the five permanent members of the Security Council enforcing the norm against testing.

Spokespeople for the Pentagon and the State Department declined to comment. A spokesperson for the Department of Energy couldnâ€™t immediately be reached for comment.

The pushback on â€œNo First Useâ€ and other proposals shows the difficulty Mr. Obama has encountered in trying to advance a nuclear disarmament agenda that he first articulated less than three months after taking office.

During a 2009 speech in Prague, Mr. Obama promised the U.S. would put an end to Cold War thinking and â€œtake concrete steps toward a world without nuclear weapons,â€ staking his legacy on an effort that months later would garner him the Nobel Peace Prize.

The following year, Mr. Obama signed the New Strategic Arms Reduction Treaty, or New START, with then Russian President Dmitry Medvedev, holding the signing in Prague to show progress on the disarmament agenda. The treaty re-established lapsed oversight and limited the number of deployed strategic nuclear warheads for each country to 1,550.

But to secure ratification of the treaty in the U.S. Senate, Mr. Obama agreed to a multidecade modernization of the U.S. nuclear force, prompting dismay among antinuclear advocates. The vast overhaul includes the development of a new nuclear cruise missile, a new intercontinental ballistic-missile system and other measures the U.S. military says are necessary to keep its nuclear capabilities up-to-date.

The White House counted the 2015 deal to curb Iranâ€™s nuclear program as another victory in its disarmament agenda. But outside the Iran negotiations, the agenda Mr. Obama hailed in Prague largely stalled in his second term.

Frosty relations with the Kremlin prevented him from reaching further reciprocal agreements on disarmament with Russia, which together with the U.S. possesses more than 90% of the worldâ€™s nuclear weapons. Russia, meanwhile, pursued a nuclear arsenal modernization of its own.

â€œWe did an awful lot at the beginning of the administration to pursue the Prague agenda, but the security environment unfortunately will not likely allow us to do much more,â€ one administration official said.

The administration is looking at an internal review of the nuclear arsenal modernization plan, but the results would likely come too late for any substantive clawback and instead go into the file for the next president, officials and people familiar with the matter said.

Discussion of a U.S. â€œNo First Useâ€ policy for nuclear weapons has come up at the White House before. Both China and India have similar policies. The Soviet Union had one, but Russia reversed the posture shortly after the Soviet Unionâ€™s collapse.

In its 2010 Nuclear Posture Review, the Obama administration considered declaring a â€œNo First Useâ€ posture that would have described the sole purpose of the American nuclear arsenal as a guarantee to deter a nuclear attack. Ultimately, however, the administration stopped short, citing â€œa narrow range of contingenciesâ€ in which the U.S. might need to conduct a nuclear strike to stop certain conventional or biological weapons attacks.

â€œWe wouldnâ€™t use nuclear weapons first against China or Russia because it would encourage full-scale retaliation that would destroy the United States, so itâ€™s not a plausible option,â€ Mr. Blair said. â€œAny other threat, including conventional, biological or chemical, we can handle with our nonnuclear military juggernaut.â€

He said a â€œNo First Useâ€ declaration would set an example for other nuclear powers and make the world safer by reducing the nuclear component of U.S. defense strategy.

But detractors, including some top Pentagon officials, say a â€œNo First Useâ€ declaration would usher in unnecessary instability and risk with little gain.

â€œThe bottom line is that adoption of a â€˜No First Useâ€™ policy now provides no obvious benefit but entails considerable additional risk such as degrading our ability to deter advanced conventional, chemical or biological attacks against us or our allies,â€ said Keith Payne, president of the National Institute for Public Policy. â€œIt would also threaten to increase the incentives for nuclear proliferation.â€Î¦

← Lost on the Way to the Voting Booth: Dignity and Respect
McKibben: Time to Declare a War (Literally) on Climate Change →