Red and yellow circus tents rose over the Rhineland farmland of western Germany last weekend, as over 6,000 climate justice activists converged for a series of action days to protest coal mining in the region. This included a mass civil disobedience campaign called Ende GelÃ¤nde (or Here and No Further), in which 3,000 participants illegally obstructed the coal mining infrastructure on Friday and Saturday.

Carrying bags of straw to protect against police batons, and accompanied by a brass marching band along with the occasional clown, activists fanned out in teams across the fields surrounding the Tagebau Garzweiler lignite coal mine and the Neurath power plant. One group entered the mine itself, while others lay on the railroad tracks to stage a blockade, preventing coal trains from delivering coal to the power plant. The mine and four main power plants in the area are operated by the German utility giant RWE, and the lignite mine is one of the largest sources of carbon emissions in Europe.

Participants were organized into 10 action groups, called â€œfingers,â€ each of which had planned their strategy ahead of time and deliberated in democratic assemblies to decide on a course of action. Within each finger, activists divided themselves into smaller affinity groups to discuss how far they were willing to go in the case of police confrontation and to keep track of each other during the actions. 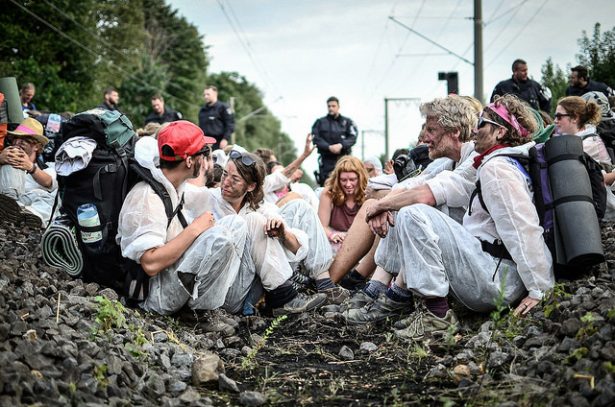 On Friday alone, activists blocked the train tracks for nine hours, including trains delivering coal from the nearby Hambach mine, causing the Neurath plant to reduce its operations by 37 percent. Other independent actions complemented Ende GelÃ¤nde, including a group of bicyclists who disrupted traffic by riding in a â€œcritical massâ€ formation and a group of rock climbers called â€œRobin Wood,â€ who swung down from bridges passing over the railroad tracks. In one act near Hambach forest, the environmental organization Friends of the Earth organized a human chain of 3,000 people to create a symbolic â€œred lineâ€ against coal mining.

Charlie, a self-proclaimed anarchist who asked not to be identified by his full name, said the railroad blockade was his first time participating in an act of civil disobedience. â€œI was so psyched, so tense,â€ he recalled.

His group, the Pink Finger, left by bus on Friday morning, then walked through the farmland towards the railroad tracks â€” at which point they were confronted by police. â€œThey immediately started pepper spraying us,â€ he said. â€œPeople were running, falling, the [police] were hitting us.â€

He said the group was eventually â€œkettled,â€ or encircled by a chain of police, until they were allowed to leave under the pretense of joining a legally-registered demonstration a few kilometers away. They set off with a police escort, but soon broke free again, running across the fields to join another group that was blockading the tracks. Charlie said the activists were then pursued by police vans and even police officers riding heavy farm equipment in collaboration with local farmers.

â€œThe farmers came with their tractors and the plowing equipment that cuts really fast in the front, and we saw police riding in the tractors with them,â€ he explained. The machines barreled within a half meter of the activists, attempting to corral them towards the police. Charlie said the uneven terrain of the potato fields made the situation extremely dangerous, as those running could easily have fallen and been struck by the machines.

Roughly half the members of the Pink Finger group made it onto the tracks in the end, where they played card games and discussed their next steps. It took two-and-a-half hours before police were able to remove them, harshly hoisting and tossing them down the dirt slope lining the tracks as protesters sang defiantly. 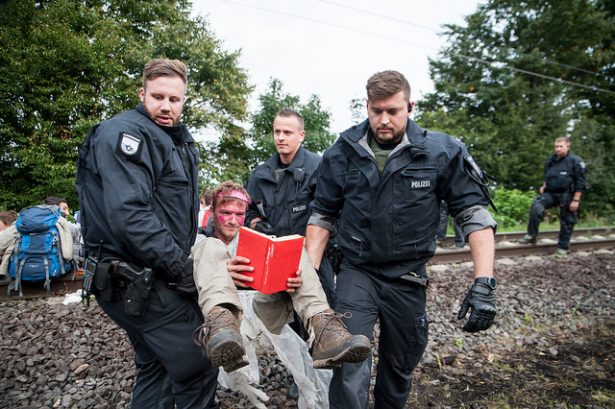 The Pink Fingerâ€™s actions were part of the Ende GelÃ¤nde civil disobedience campaign, but Ende GelÃ¤nde was only one part of a wider event encompassing a number of groups and actions. Much of the weekendâ€™s activity was based at the Rhineland Climate Camp, an event officially registered as a political rally that has taken place for the past eight years. The actions were divided into three main parts: the Replace Coal (KohleErSetzen) sit-in by JunepA, a youth network for political action; a legally registered protest action near the mine; and the civil disobedience actions of Ende GelÃ¤nde. Other independent initiatives complemented the direct actions, including a Swedish documentary project called Disobedience Live, which live-streamed the journey of four activists taking part in the action.

This was the third year in a row of the Ende GelÃ¤nde civil disobedience actions. In August 2015, over a thousand people entered the Garzweiler mine to obstruct operations. Then, in May 2016, 4,000 people blocked a coal mine and power plant in East Germany. Activists have targeted German coal infrastructure in previous years, including blockades of coal trains from the Hambach mine in 2011-2013, as well as the first blockade in the Garzweiler mine in 2014. Now the actions are becoming increasingly interconnected, attracting thousands more participants and growing more sophisticated in planning and strategy.

Eight hundred people were detained by police during the course of the actions this year, and nearly all were set free the same day as their arrest. Several hundred were injured and five went to the hospital, with reports of people being kicked, hit in the face and dragged with their heads hitting the ground.

A Swedish activist named Karl, who also declined to share his full name, was participating in Ende GelÃ¤nde for the third year in a row. Karl, who wore a cast on his arm, had been struck by a police officer with a baton while participating in the Blue Finger group, which was surrounded by police near the railroad tracks on Saturday morning.

Several participants linked police violence to the German governmentâ€™s financial and political support for the countryâ€™s coal industry. The German government provides subsidies to companies like RWE, creating the impression among environmental activists that the police were not only enforcing the law, but also actively support RWE.

Despite his injury, Karl said it was a â€œliberating experienceâ€ to be joined by so many others willing to break the law and risk injury to draw attention to the urgency of climate change. â€œCivil disobedience is one of the ways we actually manage to put the issue into the forefront where climate change often is lacking.â€

A diverse array of tactics and careful planning of strategy allowed for many groups to participate in the actions with varying levels of risk and preparation. On Saturday, a group called the White Finger was formed spontaneously by several people who took part in more intense civil disobedience actions the day before. The group set out to create a low-risk diversion for the police, aiming to draw resources and personnel away from activists blockading the railway tracks.

The White Finger led a convoy of 13 police vans on a humorous chase through the streets, accompanied by a guitarist and a juggler. Many local residents came out to wave to the activists, giving enthusiastic thumbs-up signs as they passed. The group ended symbolically in Holzweiler, a small town that has been abandoned with the expansion of the Garzweiler mine. Police barricaded the streets and told activists to turn back, despite there being no laws preventing people from entering the town. The activists spread out in front of the local church, where they held a democratic assembly deciding whether to try and break the police line or to return to the camp. 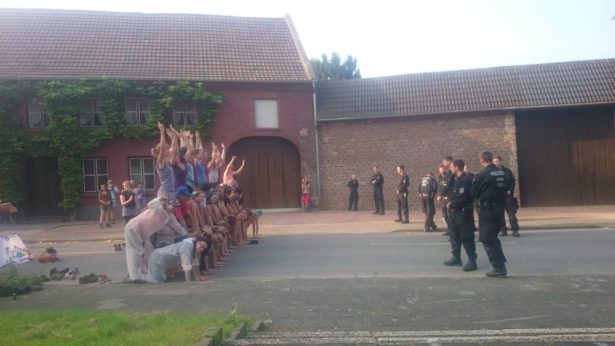 Members of the group brought out instruments, shared food, sang songs, performed acrobatics and held an impromptu poetry slam in front of the police line. The groupâ€™s energy and enthusiasm culminated in the formation of a wide human pyramid facing the police in a silly standoff, which was met with cheers and applause from locals who turned out in their cars to watch and take pictures. Activists adapted the popular German protest chant â€œWe are peaceful, what are you?â€ and changed the words to â€œWe are cute, what are you?â€

Each finger was met with raucous applause upon returning to the camp. Teams of volunteer drivers brought detained activists back from the police station, and one tent at the campsite was especially dedicated for psychological and emotional support to activists who had experienced violent confrontation with the police.

The camp itself served as a training ground, democratic community and nucleus of activity throughout the weekendâ€™s events. Emphasizing consensus, non-hierarchy and sustainable living, the camp included vegan meals, composting toilets, open workshops, live music, yoga classes and a bounce house for children. Activists and community members volunteered to cook and wash dishes, staff the information booths and clean the toilets. Decisions were discussed in large democratic assemblies, with live translations for non-German speakers.

Before the August action days, the camp was the site of the â€œDegrowth Summer School,â€ a free four-day program covering topics such as sustainable development, system change and strategies for organizing. Funding for the summer school â€” which was supposed to come from the Foundation for Environment and Development North Rhineland-Westphalia â€” was canceled 10 days before it began, leading to a loss of 46,000 euros. The cuts occurred ostensibly because the program took place too close to acts of civil disobedience, which funders are often unwilling to support due to the illegal nature of the activity.

Ende GelÃ¤nde plans to continue civil disobedience at the U.N. climate talks in Bonn later this year. According to activists like Karl, the movement for climate justice cannot simply advocate compliance with the Paris climate accords. The goal must instead be the dismantling of the fossil fuel infrastructure, as a 2 degrees Celsius rise in the global temperature already surpasses the threshold of catastrophic climate change.

â€œWe need to work towards a just transition, and we need to do it now,â€ Karl said. â€œThatâ€™s what these people are putting their bodies on the line for.â€

Strategic civil disobedience campaigns like Ende GelÃ¤nde offer one example of how broad-based participation and creativity can be used to confront a daunting opponent, even one as powerful as the fossil fuel industry.Î¦

Originally from New Hampshire, Sarah Freeman-Woolpert studied international affairs and conflict resolution at The George Washington University. She has lived for the past two years in Sarajevo and Belgrade conducting research on youth activist movements and also serves as the Assistant Editor for the Journal of Resistance Studies. This article was published on August 30 at Waging Nonviolence.

← 9 Amazing New Innovations That Are Creating More Fuel Efficiency
Impacts of Trump & Paxtonâ€™s Policies: â€œU.S. Might Not Have Enough Construction Workers to Rebuild” →