There are no publicly available statistics, but it is believed only 10 women have
refused to serve in the IDF on non-religious grounds in the last two years Noa Gur Golan.

â€œWhen I was little, I dreamt of being an IDF war pilot,â€ says 19-year-old Noa Gur Golan.

Now, however, the teenager is sitting in Military Prison 396 near Haifa. Sheâ€™s been branded a traitor and a coward. Itâ€™s not clear when she is going to be released, because sheâ€™s being detained for refusing to do her military service with the Israel Defence Force (IDF).

Noa is not allowed to receive international calls. But in her answers to The Independentâ€™s questions, relayed via her mother Iris and aunt Michal, who were also interviewed for this exclusive story, the young woman provides an extraordinarily rare insight into what happens to young people in Israel who would rather face prison time than compromise on their opposition to Israeli policy.

All three women are keen to stress that Noa loves her country and is happy to serve it. But since the conscription process began when she was 17, Noa has come to the conclusion she cannot condone the â€œviolence and deathâ€ inherent in being part of a military organisation.

â€œIf war is the answer, we are asking the wrong question,â€ reads a postcard nestled among photographs of family and friends on a pin-board in her bedroom.

It is highly unusual for Israelis to refuse to do their compulsory military service on non-religious grounds. Iris says Noaâ€™s decision was a â€œhuge shockâ€ â€“ no one in the family or anyone else Noa knew had ever done it before.

Her older brothers, one 29 and one 24 â€“ the latter finished his own conscription 18 months ago â€“ support Noaâ€™s choice, but still think she is naive, Iris says.

All Jewish, Druze and Circassian Israeli citizens over 18 are expected to report for duty in the IDF; Israelâ€™s 20 per cent Arab population is exempt. Men serve for two years and eight months, and women for two years.

In practice, only around 75 per cent of potential conscripts end up enlisting. Most who evade service do so because they are Orthodox, and Orthodox women are the only major group of people allowed to complete civic, rather than military, service.

There are no publicly available statistics, but the support network Noa is currently relying on believes only 10 women have been imprisoned for refusing to serve on non-religious grounds in the last two years.

A handful of people each year manage to avoid military service by proving they are pacifists â€“ but after two hearings so far, this is a position Noa is finding it difficult to convince the authorities of.

Some pro-bono legal organisations which help defend conscientious objectors report that defendants are asked questions such as: â€œWould you kill someone hurting a member of your family?â€ to which any other answer than â€œnoâ€ is used as evidence of a non-pacifist outlook. 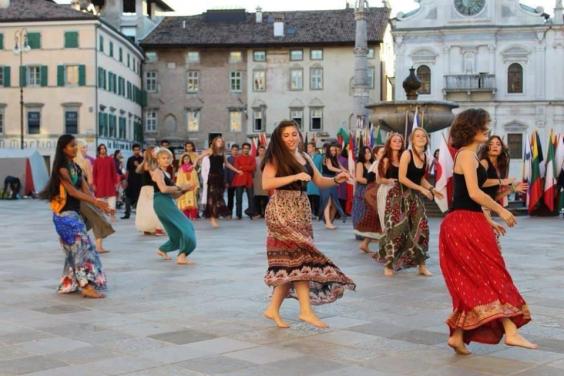 Noa performing with fellow students from around the world at the United World College of the Adriatic in Duino (Iris Gur).

The military committees haveÂ “a very narrow definition of what pacifism is, and traditionally do no exempt anyone who hints to a ‘political’Â reason for refusing (mainly opposition to the occupation),” she said via email.

The IDF did not immediately respond to The Independentâ€™s request for comment. In an emailed statement dated 13 August, however, Â a spokespersonÂ said that “Service in the IDF is mandatory by law, and is critical in maintaining the security of the state of Israel.

“The committee found that Gur-Golan did not meet the conditions of conscience objection and thus her request was denied. On the day of her recruitment, Noa violated the law and thus “disciplinary action was taken against her”.

“Refusal to draft, in violation of the law, is extremely rare and the IDF deals with a very minor number of such requests per year,” a statement added.

“It is rare for teenagers to refuse the draft and it is found only within circles on the hard left”, says Yehuda Shaul, the founder of anti-occupation veterans group Breaking the Silence.

â€œThese people pay a very high personal price for their decisions and they usually spend three months to a year-and-a-half in prison.â€

IrisÂ says it is hard to understand the role the IDF plays in the country if you are not Israeli.

â€œWe grow up with the IDF, it is part of the education we get in Israel. It keeps us safe and service is a part of the fabric of our lives,â€ she says. 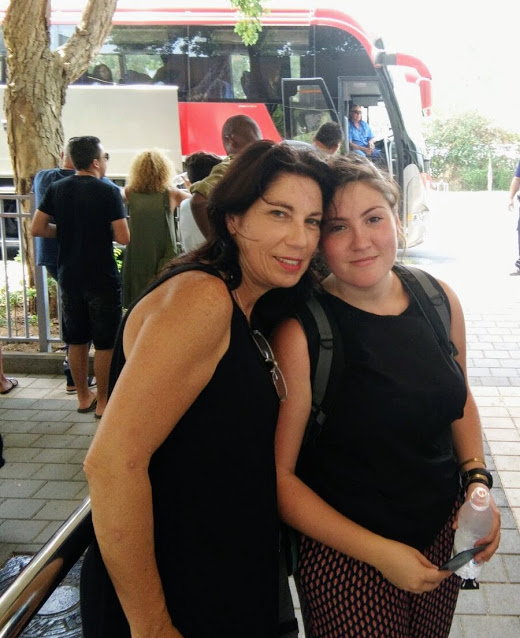 Noa and Iris on 12 July, the day Noa was detained for the first time (Iris Gur).

Noa herself, in an open letter written before she refused the draft last month, says that experiencing the 2014 Gaza War as an adult working with children opened her eyes to â€œthe kind of atmosphere children in this country grow with. An atmosphere full of hate and fear. They grow up in a reality where violence is the norm.â€

As a result of her choice, she has been detained for a total of 31 days since 12 July â€“ released briefly between military committee hearings before being locked up in Prison 396 again, where she shares a room with up to nine other women and can only see her family once a fortnight.

While inside, Iris says, Noa has been talking to other detainees about what she is doing, and why.

â€œShe is well-liked, I think. She showed me a letter that one of the women who has since got out sent and she says she respects her even if she doesnâ€™t agree with Noaâ€™s opinion,â€ Iris says. â€œThey are learning from each other.â€

Noa, for her part, says she does not â€œlook away from the complicated reality in which we live â€“ the terror attacks and the warsâ€ and does not â€œblame any soldier or any person who sees life differently than I do.â€

Her views, however, have changed since she went to Italy to complete her last two years of school at the United World College of the Adriatic, a sixth-form college which is part of a network of 17 scholarship-based institutions around the world which bring together students of different nationalities to â€œmake education a force to unite people, nations and cultures for peace and a sustainable futureâ€.

Noa and a Palestinian girl from Hebron were the recipients of the two scholarships available for Israel and The Territories to attend the college in Duino in 2014.

â€œI have had the privilege of meeting friends from the Palestinian Territories, Jordan and other countries. I have gotten to know the people, their personal stories and not the perceptions we were raised upon,â€ Noa says.

For Iris, Noaâ€™s decision has been very hard. Her military service was 30 years ago, and the idea of refusing when she was young was â€œunthinkableâ€.

â€œI broke down after I saw her in there the first time,â€ Iris says of military prison. â€œShe is alone and afraid. But she believes what she is doing is meaningful.

â€œNoa could lie to get out of military service, she could claim to be unwell or religious, but sheâ€™s not, sheâ€™s making a point of principle. And for that I am very proud of her.â€

â€œI see my refusal as an active step of showing an alternative to the violent reality in which we have gotten used to living,â€ Noaâ€™s open letter concludes.

â€œFor the sake of true security, I believe there must be another way.â€Î¦

Bethan McKernan is a reporter covering the Middle East for The Independent, based in Beirut. Before that she worked at the Associated Press in London and New York. She has degrees from the Columbia University Graduate School of Journalism, where she was a scholarship Fellow at the Stabile Center for Investigative Journalism, and Oxford University. Things she likesÂ  learning and writing about include the refugee crisis and migration more generally; current obsessions are cybersecurity stories and anything to do with Cuba. She is from Barry, on the South Welsh coast. This article first appeared at The Independent on August 11.