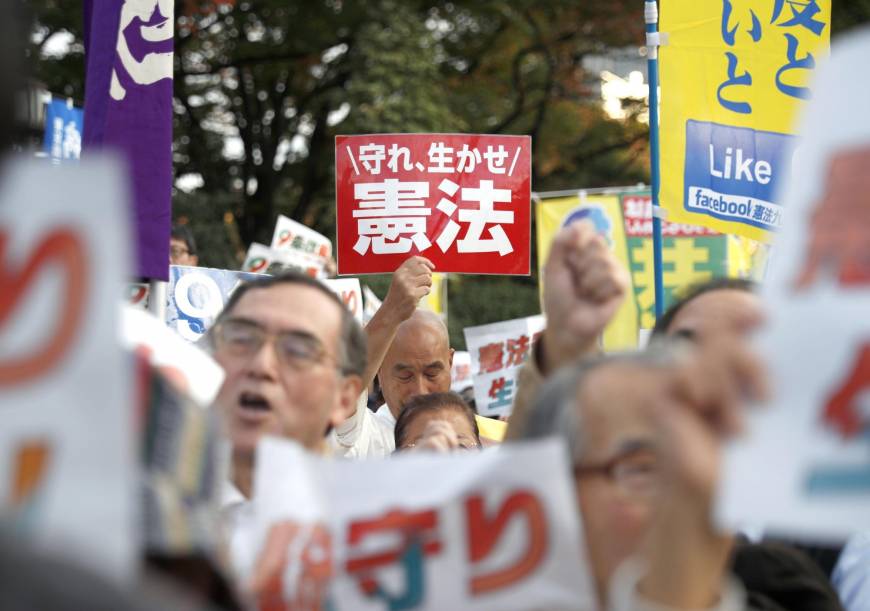 Protesters hold signs saying ‘Save the Constitution’ in front of the Diet building on Friday.
KYODO

Tens of thousands of people staged a rally in central Tokyo on Friday to protest Prime Minister Shinzo Abeâ€™s push to amend the Constitution.

About 40,000 people gathered outside the Diet to mark the 71st anniversary of the promulgation of the Constitution, the organizers said.

â€œThe Japanese government is on the path of opposing a ban on nuclear weapons and destroying Article 9 of the Constitution,â€ said Akira Kawasaki, a member of the international steering group of the International Campaign to Abolish Nuclear Weapons (ICAN), winner of this yearâ€™s Nobel Peace Prize.

â€œThe right path to take is to campaign to protect and use Article 9 and eliminate nuclear weapons globally,â€ Kawasaki said, referring to the war-renouncing provision.

Former Supreme Court justice Kunio Hamada expressed opposition to Abeâ€™s proposal for amending Article 9 to legitimize the Self-Defense Forces. The proposal â€œwill undermine the trust and standards built over the 70 years since the end of World War II,â€ he said.

Toshiyuki Sano, a 67-year resident of the capital, said both his father and uncle were pulled into the war and his uncle died.

Abeâ€™s ruling coalition swept to a victory in the House of Representatives election on Oct. 22.

Political forces in favor of amending the Constitution, including the ruling bloc, currently hold a two-thirds majority in both chambers of the Diet, the level required to put constitutional revisions to a national referendum.Î¦

This article appeared on November 3 in The Japan Times.

← How Can We Turn Military Spending into a Budget for the People?
Trump’s Finger on the Button is not the Main Problem with Nukes →