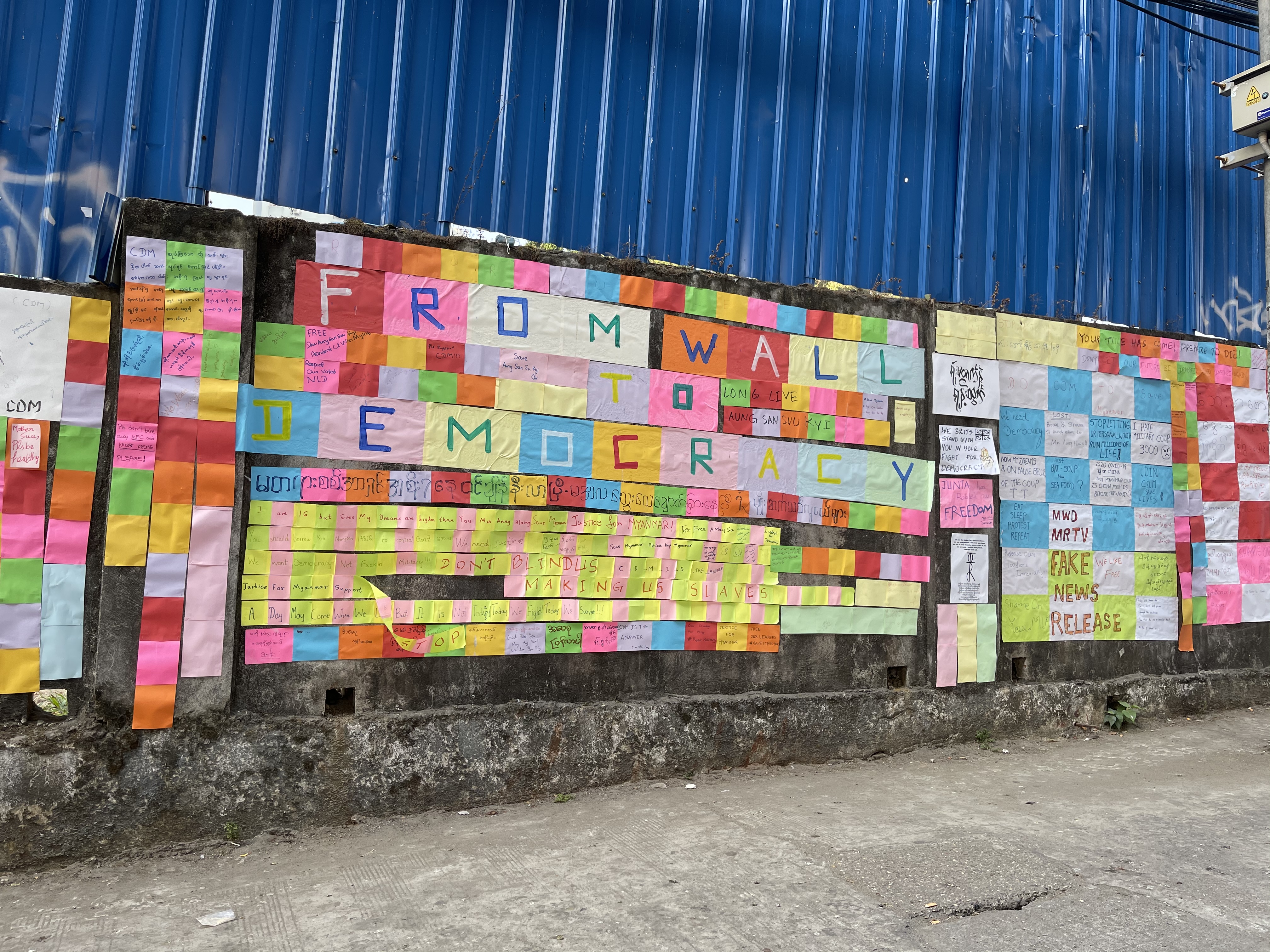 A freedom wall installed by anti-coup protesters. Used with permission.

The timeline below details some of the oppressive laws and brutal crackdown of the military.

On the evening of February 8, a nationwide curfew (Article 144) and Assembly Law restricting gatherings of more than 5 persons were issued by the military council.

On February 9, the Ministry of Telecommunications and Communications, under the control of the military council, introduced a draconian Cyber Security Bill that could be used to arrest online protesters. The bill was opposed by 161 civil society organizations and Myanmar Computer Federation.

That same day, police started shooting at protesters with live ammunition and water cannons in the capital city Naypyidaw. A 19-year-old woman protester, Mya Thwe Thwe Khine, was shot in the head. She died in hospital on February 19 and became the protest movement’s first martyr.

The cybersecurity law has not been passed, but on February 10 the military council amended the Laws Protecting Citizensâ€™ Privacy, which now authorizes the police to arrest people without a warrant and detain them for more than 24 hours. And on February 13, the Ward or Village-Tract Administration Law dating back to the era of the previous military junta was reintroduced. The law requires people to register to seek permission in order to move around at night.

Starting around February 11, nighttime arrests of people participating in the civil disobedience movement began increasing during curfew time. Some of these attempts succeeded in being prevented, as community members gathered and deterred the police.

Then on February 13, the military issued warrants for the arrest of seven protest leaders and artists.

On the evening of February 14, the military attacked protesters near the electricity office in Myitkyina, the capital of Kachin state. Although there were no injuries, some journalists were arrested.

On February 15, a disabled person was brutally attacked by riot police during a crackdown.

On February 18, the military and police launched a violent crackdown in the capital city Nay Pyi Taw and arrested around 50 protesters. This marked the beginning of mass arrests during protests in cities across the country.

On February 20, police and the military opened fire on civilians on the Mandalay jetty after protesters tried to prevent military operatives from taking a ship on strike. Two people died on the scene and several protesters were injured. The attack in Mandalay was reportedly perpetrated by the notorious 33 Light  Infantry Division, the same group accused of committing atrocities against the Rohingya in 2017.

Later that week, a video of a soldier displaying real guns and weapons and threatening to shoot people in the head was shared on social media. Meanwhile, several clips of soldiers instigating violence and threatening protesters were spread abundantly on TikTok.

On the evening of February 25, a large police force raided Tarmwe township in Yangon and arrested 15 protesters, marking the first use of force and arrests in Myanmarâ€™s largest city.

On February 26, the military started to disband major protest points in Yangon using sonic bombs, tear gas, and live ammunition, ramping up the violent crackdown on the city. On the same day, similar crackdowns occurred in other big cities such as Mandalay and Naypyidaw. The military activity continued in Yangon on February 27 and 28, with several protesters arrested.

On February 27, the military brutally suppressed protests in the town of Monywa in central Myanmar. Two people were fatally injured.

February 28 saw the most brutal crackdown since the start of the protests: 18 people were killed across seven citiesâ€“Yangon, Myeik, Dawei, Mandalay, Mawlamyine, Bago and Pakkokuâ€”during the nationwide Milk Tea Alliance-related protests. It was the most violent day in all of February.

As of March 2, according to the Assistance Association for Political Prisoners,  nearly 1,300 individuals have been arrested, charged or sentenced since February 1, and 988 are still in detention or have outstanding warrants.

Among those arrested and targeted with violence have been journalists and minors.

On March 3, an even bigger atrocity resulted in 38 deaths in cities of Monywa, Mandalay, Myinchan, Mawlamyine, Kalay and Yangon.

In Yangonâ€™s North Oakkala [WARNING: GRAPHIC IMAGERY] township there were reports of the military using sub-machine guns; at least 20 people died as a result. A [WARNING: GRAPHIC IMAGERY] video of a protester being shot in the head while being arrested in Yangon is one of the examples of footages of military atrocity widely shared on social media.

Records of human rights violations by the military, including attacks targeting medical volunteers, continue to spread on Facebook and Twitter.

As of March 3, the death toll during the protests stands at least 50. Most of those killed were shot in the head by soldiers deployed by the military council.

On March 1, the Committee Representing Pyidaungsu Hluttaw (CRPH), the committee formed by the ousted National League of Democracy in opposition to the junta, declared the State Administrative Council led by the coup’s leader, General Min Aung Hlaing, a terrorist organization on account of the human rights violations they have perpetrated against peaceful protesters and civilians.

Myanmar’s citizens have been appealing for United Nationsâ€™ support in resisting the coup staged by the Tatmadaw, the country’s military, on February 1, 2021. Placards calling for intervention by the UN or even the United States can be spotted at the many protests taking place across the country.

At the first UN Human Rights Council meeting in Geneva on February 12, Myanmar’s Permanent Representative to the UN in Geneva, Myint Thu, spoke on behalf of the military council.

On February 26, however, during the second UN General Assembly in New York, Myanmar’s ambassador to the UN, Kyaw Moe Tun, took a stand and made a surprise statement appealing to the UN Security Council on behalf of the civilian government to take action against the Myanmar military. He concluded his speech in Burmese, his voice cracking, praising and thanking the Myanmar people, and held up three fingers, the gesture that has become a symbol of resistance to the junta.

The military council fired Kyaw Moe Tun the next day, calling him a national traitor, but the image of the ambassador giving the three-finger salute became a source of hope for the people.

As the violence perpetrated by the military increased in the last week in February, expectations were high among Myanmar’s citizens that the UN would intervene. Messages like â€œHow many dead bodies does the UN need to take action against the Burmese military?â€ appeared on social media and protest placards, as well as the darkly ironic â€œShoot me if you need another dead body for UN action.â€

Global Voices is an international, multilingual, primarily volunteer community of writers, translators, academics, and human rights activists. Together, we leverage the power of the internet to build understanding across borders. More about Global Voices here.

This article originally appeared on the blog of a Global Voices contributor who doesn’t wish to be identified. It is published here as a three-part series. It was published on March 15 at Global Voices.