Huge amounts of plastic ends up rivers and oceans every year, harming the environment and potentially also human health. But what if we could pull it out of water with the power of magnets? (Image credit: Fionn Ferreira)

As a child, Fionn Ferreira spent hours exploring the coastline near his hometown of Ballydehob in south-west Ireland. But the more time he spent on the sheltered, shingle-strewn coves nearby, he grew increasingly shocked by the large amounts of plastic litter he found strewn across the beach and in the sea.

“It didn’t look nice to me â€“ the colored bits of plastic all along the shore,” he says.

Around the world, humans produce an estimated 300 million tonnes of plastic waste every year, and at least 10 million tonnes end up in our oceans â€“ the equivalent of a rubbish truck load every minute.

But it was the plastic that Ferreira couldn’t see which really concerned him. Microplastics are fragments smaller than five millimetres and either come directly from the products we use or are created as larger plastic objects break down in the environment. They are ubiquitous â€“ they have been found at the bottom of the world’s deepest ocean trench and lodged in Arctic sea ice.

“I got really anxious when I found out about microplastics,” says Ferreira, who is now aged 20 and a chemistry student at Groningen University in the Netherlands. “These plastics are going to be in our environment for thousands of years. We are going to be dealing with them long after we stop using plastic.”

As he learned more about the environmental impact of microplastics in the environment, Ferreira began to look for ways to combat them. And it was a serendipitous discovery on his local beach that gave him the idea for a new way to remove these tiny, omnipresent plastics from the oceans. 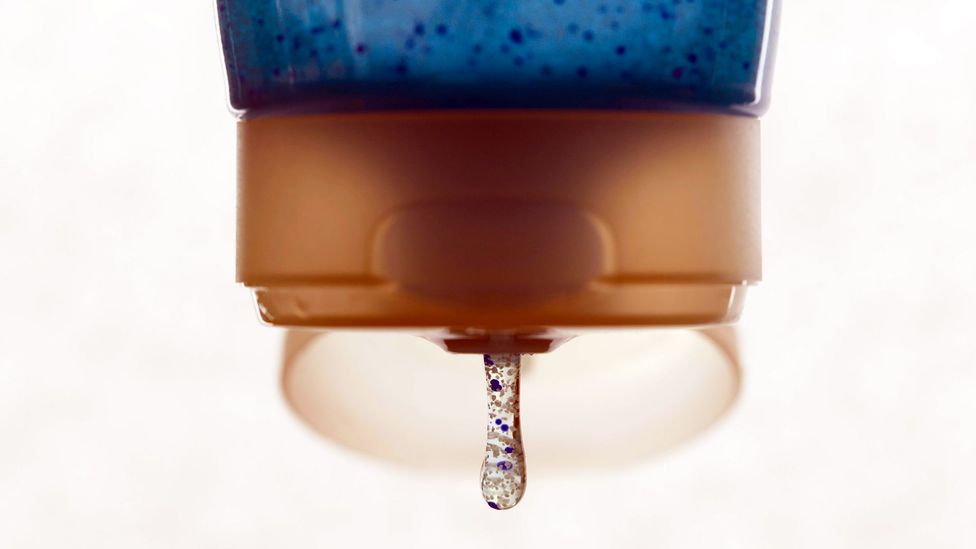 Some shower products contain tiny plastic beads that when washed down the drain can escape into the environment where they are difficult to get rid of (Credit: Alamy)

Microplastics are found in our clothes, cosmetics and cleaning products. One load of laundry can release an average of 700,000 microplastic fibres. Less than a millimeter in length, these fibers make their way into rivers and oceans, where they are eaten by fish and even corals. Because of their tiny size, microplastics are able to pass through filtration systems, making it very difficult to avoid them.

One 2018 study, plastic contamination can also be found in bottled water, with 93% of 259 bottled water samples the scientists examined containing microplastics.

According to recent research, we constantly inhale and ingest microplastics during our daily lives. One study in 2019 by researchers at the University of Newcastle found that globally people ingest an average of 5g of plastic every week â€“ the equivalent of a credit card. The impact that this diet of microplastics has on our health, however, is still poorly understood.

Chemicals used in plastic have, however, been linked to a range of health problems including cancer, heart disease and poor fetal development. Studies have found that human exposure to microplastics could cause oxidative stress, inflammation and respiratory problems.

“The urgency of the plastic problem has not yet hit people,” says Ferreira. “Plastic pollution is a public health issue. You are not just drinking the plastic, but also the chemicals that are added to it. Plastic attracts heavy metals and brings these into our system.”

Another concern is that plastics could help transport pathogens which bind themselves to the material. A 2016 study found the pathogen Vibrio cholerae, which causes cholera in humans, attached to microplastics sampled from the North and Baltic Seas.

“It is not just a problem of the health of our environment, but really a problem that concerns all of us and our health,” says Ferreira.

After the microplastics attached themselves to the ferrofluid, Ferreira used a magnet to remove the solution and leave behind only water

And the amount of plastic in the environment is projected to get much worse. Plastic production is expected to increase by 60% by 2030 and triple by 2050. By then, there could be more plastic than fish in the ocean, according to the Ellen MacArthur Foundation, a UK non-profit that promotes the circular economy where materials are reused rather than thrown away.

At the age of 12 years old, Ferreira became determined to find a solution to remove microplastics from water. He started by designing his own spectrometer, a scientific instrument that uses ultraviolet light to measure the density of microplastics in solutions.

“I could see there were a lot of microplastics in the water and they weren’t just coming from big plastic breaking down in the sea,” he says. “There needed to be a way to combat this.”

It was on his local beach that Ferreira came up with a solution that could extract microplastics from water. “I found some oil spill residue with loads of plastic attached to it,” he says. “I realized that oil could be used to attract plastic.”

Ferreira mixed vegetable oil with iron oxide powder to create a magnetic liquid, also known as ferrofluid. He then blended in microplastics from a wide range of everyday items, including plastic bottles, paint and car tyres, and water from the washing machine.

After the microplastics attached themselves to the ferrofluid, Ferreira used a magnet to remove the solution and leave behind only water.

Ferreira is currently in the process of designing a device which uses the magnetic extraction method to capture microplastics as water flows past it. The device will be small enough to fit inside waterpipes to continuously extract plastic fragments as water flows through them. He has also been working on a system that could be fitted to ships so they can extract plastics on the oceans. 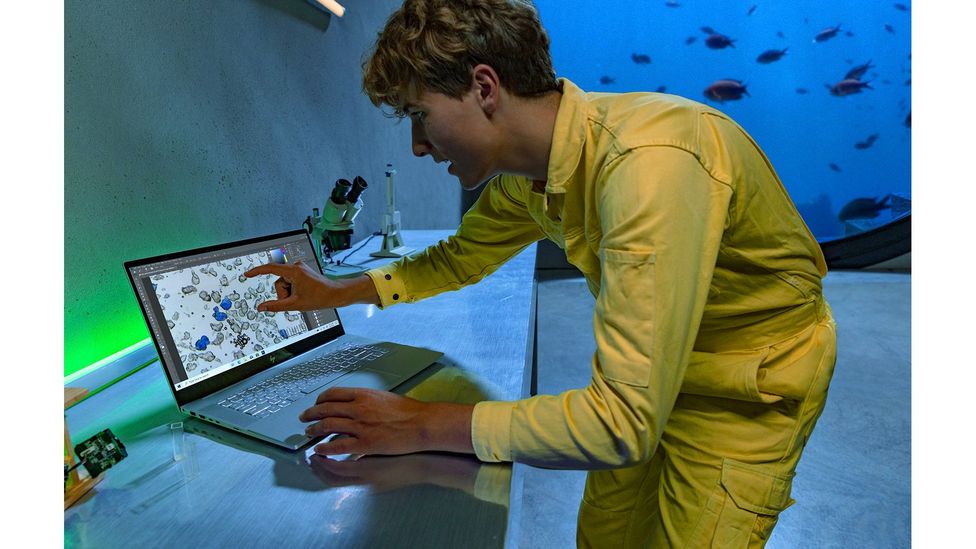 Microplastics are found in a wide range of cosmetics and toiletries, but can also come from synthetic clothing and larger plastic items as they break down (Credit: HP)

“There is no current effective solution to remove microplastics in natural waterways,” says Anne-Marieke Eveleens, who created another device known as the Bubble Barrier, a tube device that can be installed on canals and rivers to trap larger plastic waste with a stream of bubbles that guides it to a catchment area, preventing it from entering the ocean. “Our Bubble Barrier is very effective at catching macroplastics and can catch microparticles of plastic as small as 1 mm. Fionn’s innovation has the capacity to remove all types of microplastics.”

In 2019, Ferreira presented his invention to a panel of expert judges at the Google Science Fair, which led to him winning the competition and receiving an educational scholarship of $50,000 (Â£36,400).

“He observed and tackled a problem he saw locally which has vast global significance,” says Larissa Kelly, Ferreira’s former science teacher at Schull Community College and his mentor for the Google Science Fair entry. “His invention, based on very simple components, is groundbreaking. It has powerful potential to provide solutions that will contribute to the worldwide effort to remove microplastics from the environment.”

“I started out as a lonely inventor,” says Ferreira. “After the Google Science Fair, I could all of a sudden speak to scientists â€“ they gave me credit for what I had done. My idea was no longer a toy invented by a child.”

After receiving funding from the Footprint Coalition, which was founded by actor Robert Downey Jr, Ferreira started scaling up the technology so it could be used at wastewater treatment facilities and prevent microplastics from escaping into the ocean.

He is currently working with US company Stress Engineering to fine-tune his invention and design a device out of stainless steel, glass or recycled plastic. “We’re trying to make something where we are not creating more plastic pollution,” he says. 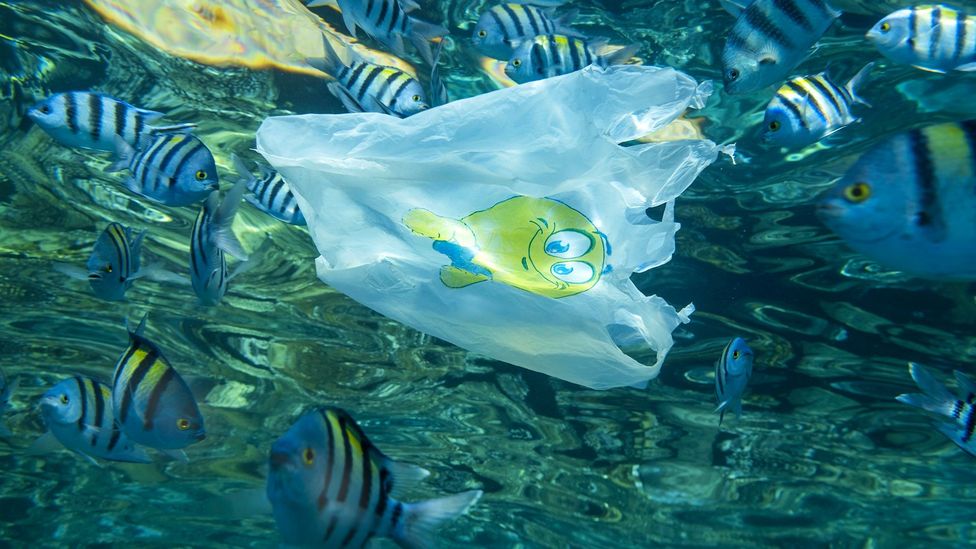 Humanity produces millions of tonnes of plastic waste every year and a large amount of it escapes to pollute natural habitats (Credit: Andrey Nekrasov/Getty Images)

The technology is “very quick, cheap and low energy,” he says, adding that it can easily be integrated into existing facilities and is able to handle normal flow rates of water.

Ferreira is also developing a consumer-focused device which can be installed inside pipes in homes, cleaning the water as it enters and leaves the house. The aim is to provide people with water that is both safe to drink and sustainable.

“I don’t want to be drinking plastic every day,” he says. “By building this device in our homes, we are not only protecting our health, but also raising awareness.”

He is testing the devices in different water bodies around the world and hopes to commercialize both within the next two years.

But Ferreira says he has encountered skepticism throughout his journey as a young inventor and hopes that inventions such as his will help change that attitude. And as his generation inherits problems created by those that came before them, the world is likely to need more imaginative solutions.

“A lot of people don’t trust young inventors,” he says. “That needs to change. Youth have the power to come up with new creative ideas, they aren’t trained to look down just one tunnel.”

Isabelle Gerretsen is a freelance Dutch-English journalist in London. She currently works as a reporter for Climate Home News and as a freelance digital writer and producer for CNN International and the BBC.

This article was published on August 25 at BBC.com.

This article is part of BBC Future’sÂ Bright Sparks: SustainabilityÂ series, which sets out to find the young minds who are finding new and innovative ways of tackling environmental problems. They are the next generation of engineers, scientists and entrepreneurs who are taking control of their own future by seeking solutions to climate change, pollution, biodiversity loss and over-consumption.

Yourbassguy recommends that, if you’re interested in mercury in fish, you check out:

← Calculating the Costs of the Afghanistan War in Lives, Dollars and Years
You Can Help Stop Climate Chaos: 25 Ways →