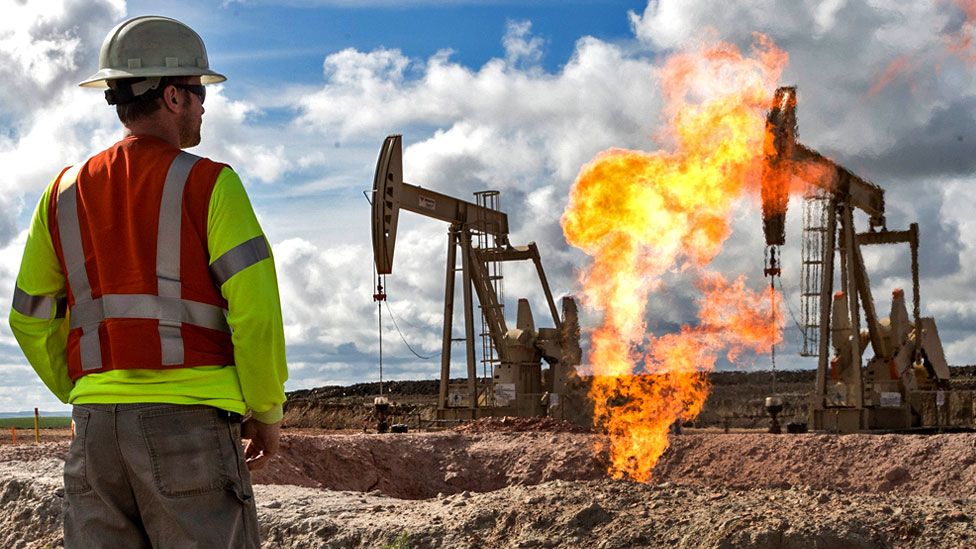 There were more delegates at COP26 associated with the fossil fuel industry than from any single country, analysis shared with the BBC shows.

Campaigners led by Global Witness assessed the participant list published by the UN at the start of this meeting.

They found that 503 people with links to fossil fuel interests had been accredited for the climate summit.

These delegates are said to lobby for oil and gas industries, and campaigners say they should be banned.

“The fossil fuel industry has spent decades denying and delaying real action on the climate crisis, which is why this is such a huge problem,” says Murray Worthy from Global Witness.

“Their influence is one of the biggest reasons why 25 years of UN climate talks have not led to real cuts in global emissions.”

About 40,000 people are attending the COP. Brazil has the biggest official team of negotiators according to UN data, with 479 delegates.

The UK, which is hosting the talk in Glasgow, has 230 registered delegates.

So what counts as a fossil fuel lobbyist?

Global Witness, Corporate Accountability and others who have carried out the analysis define a fossil fuel lobbyist as someone who is part of a delegation of a trade association or is a member of a group that represents the interests of oil and gas companies.

Overall, they identified 503 people employed by or associated with these interests at the summit.

They also found that:

One of the biggest groups they identified was the International Emissions Trading Association (IETA) with 103 delegates in attendance, including three people from the oil and gas company BP.

According to Global Witness, IETA is backed by many major oil companies who promote offsetting and carbon trading as a way of allowing them to continue extracting oil and gas.

“What we seeing is the putting forward of false solutions that appear to be climate action but actually preserve the status quo, and prevent us from taking the clear, simple actions to keep fossil fuels in the ground that we know are the real solutions to climate crisis.”

The IETA says it exists to find the most efficient market-based means of driving down emissions. Members include fossil fuel companies but also a range of other businesses.

“We have law firms, we have project developers, the guys who are putting clean technology on the ground around the world, they’re also members of our association as well,” says Alessandro Vitelli, an IETA spokesman.

“We’re not coming to a shuddering halt today and tomorrow, and suddenly there’s going to be no emissions from the combustion of fossil fuels.”

“There is a process to transition that’s under way, and carbon markets are the best way to make sure that transition takes place.”

Campaign groups argue that the World Health Organization didn’t get serious about banning tobacco until all the lobbyists for the industry were banned from WHO meetings. They want the same treatment for oil and gas companies at COP.

“The likes of Shell and BP are inside these talks despite openly admitting to upping their production of fossil gas,” said Pascoe Sabido of the Corporate Europe Observatory, who were also involved in the analysis.

“If we’re serious about raising ambition, then fossil fuel lobbyists should be shut out of the talks.”

This article was published on November 8 at bbc.com.