The Netherlands has reduced its prison population to such a degree that itâ€™s now turning old prisons into socially useful buildings, such as schools and refugee centres. What went right?

A vast X-shaped building marks the spot on an Amsterdam map that has brought a decade-long search to a close.

Spread across three maxed-out campuses, with almost 1,000 students on roll, the British School of Amsterdam had struggled to keep up with the capitalâ€™s growing demand for international education. That was until it found the striking 14,000m2 property, which it moved into in April.

The site had many advantages, not least its security, because âˆ’ until recently â€“ it had in fact been a prison. What is now the schoolâ€™s freshly painted theatre with shiny chestnut-coloured beams was, until 2013, the prison chapel. And the mirrored dome at the buildingâ€™s heart was a way to survey the four corridors branching out from it.

â€œWeâ€™ve kept the wings. They just worked really well for each of the school sections,â€ explains the schoolâ€™s communication manager Lisa Harrison, who says the cheerful atmosphere in the building â€œsurprises everyoneâ€.

It is the latest example of prison buildings in the Netherlands being repurposed, often in socially useful ways. Just 20km away, in Haarlem, the former De Koepel prison is being converted into a multi-purpose site to include student accommodation and social housing â€“ answering a national shortage of both.

Meanwhile in the province of Drenthe, the National Prison Museum, housed since 2005 in a former penal colony, aims to open up a nuanced conversation on crime and punishment, as well as sharing its gruesome history.

Quirkier uses have also been found. Utrechtâ€™s Wolvenplein created a city beach within the steep walls of its exercise yard, while âˆ’ before its demolition âˆ’ Amsterdamâ€™s Bijlmerbajes provided employment for some of the asylum seekers temporarily housed there, by converting 15 cells into a Syrian hammam.

As the UK embarks on its largest prison building programme in over a century, with prisoner numbers almost doubling in the last 30 years, the prison population in the Netherlands is going in the opposite direction. Apart from a small rise in the past three years, it has otherwise been steadily shrinking. Today, the incarceration rate per capita is half the UKâ€™s; there are far fewer repeat offenders; and reported crime continues to decline. At times, the Netherlands has even resorted to importing convicts from abroad to fill its empty cells and keep some prisons open. 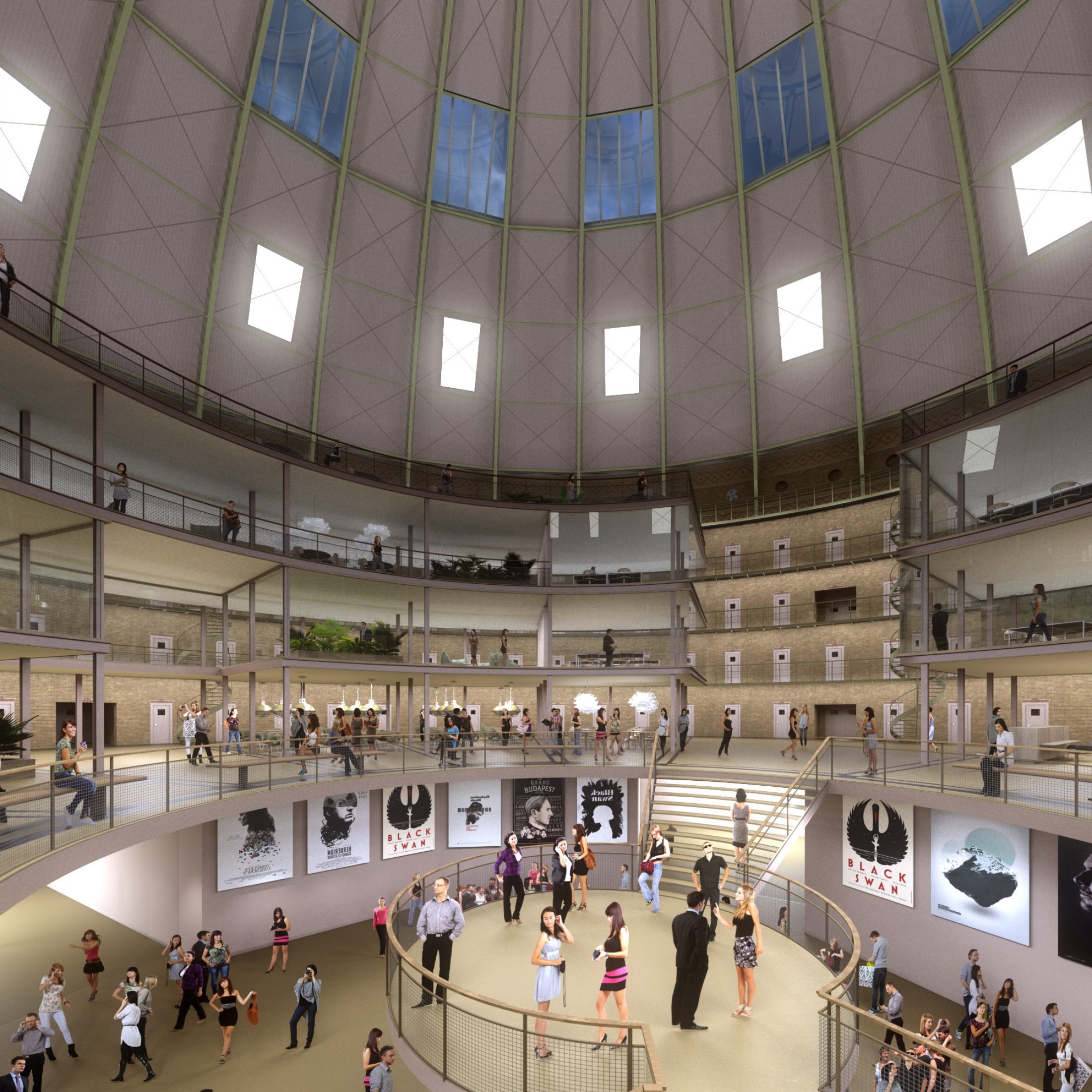 But while the British government dishes out the most life sentences in Europe, under the leadership of a prime minister who says he is keen to see hi-vis chain gangs introduced, the Dutch see the benefits of a less punitive approach. (Only around 30 people there are serving life sentences.)

Reeling from the Nazi occupation during the second world war, the Netherlands had â€œa strong sense of the dangers of an overbearing state and the horrors of imprisonmentâ€, explains Francis Pakes, a Dutch national and professor of criminology at the University of Portsmouth. This meant that prison sentences were used more sparingly than before the war, and detainees were usually treated with greater humanity.

â€œIn the UK, to be tough on crime is framed as a solution against a threat of disorder,â€ says Pakes. â€œWhereas in the Netherlands [historically], crime was just something the system had to respond to.â€ The decriminalization of soft drug use and sex work (in 1976 and 2000 respectively) reflects this pragmatic approach, while investment in youth intervention schemes, electronic tagging, and residential care for offenders with addictions and mental health problems has promoted rehabilitation and minimized prison time. 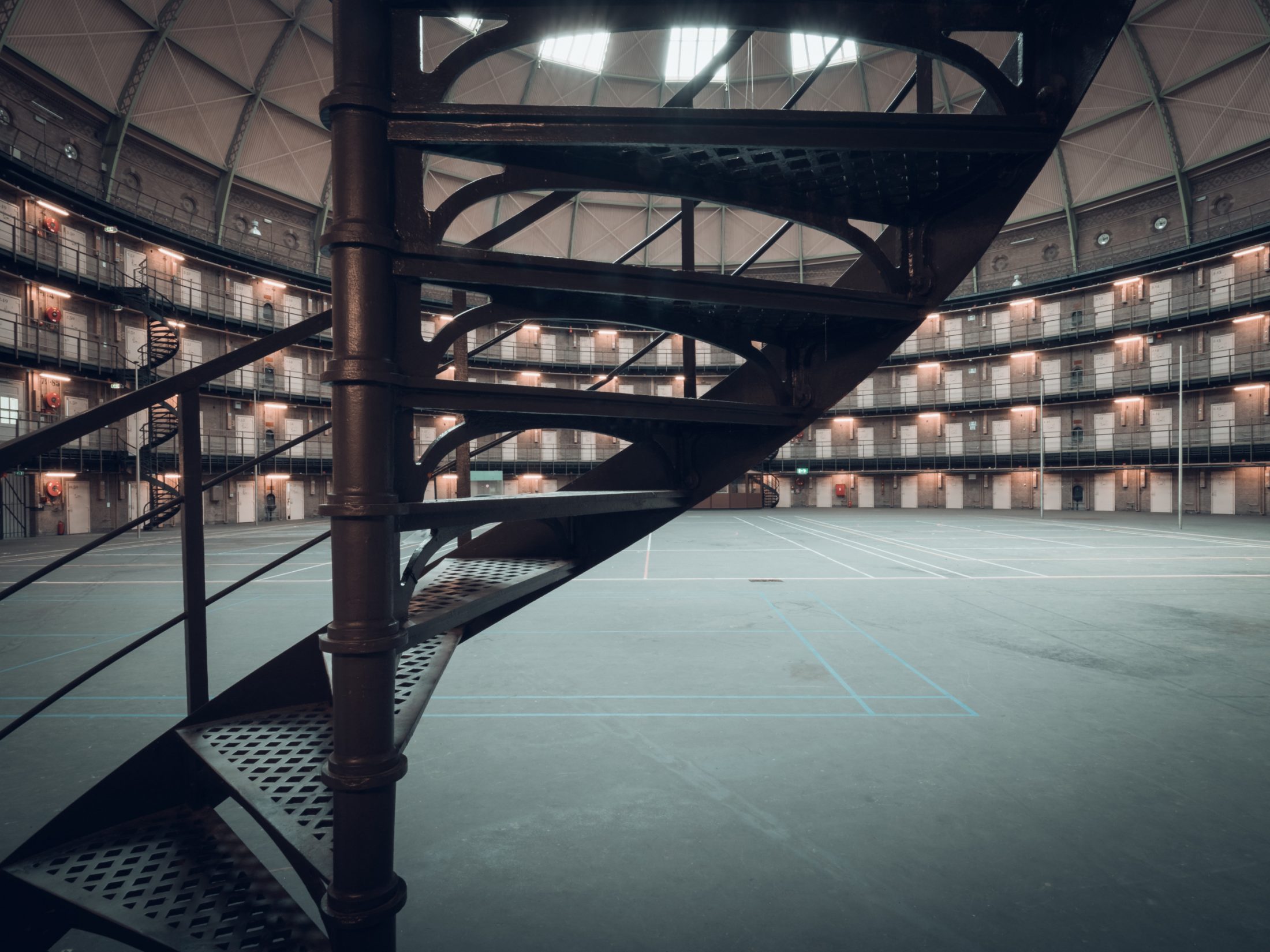 â€œIn the Netherlands [compared to the UK], the prisons are âˆ’ by and large âˆ’ better maintained, better staffed, more spacious and more decent places,â€ explains Pakes. These are all factors that, studies have shown, make offendersâ€™ successful reintegration into mainstream society more likely.

Low rates of poverty, high social security and a relatively unmaterialistic culture â€“ in the Netherlands, being unshowy about wealth and living simply are generally valued traits â€“ all play a role in reducing crime. And, the lack of minimum sentencing means that lengthy jail spells â€“ which Dutch research links to higher reoffending rates â€“ are rare.

Amsterdam-based musician, author and social entrepreneur Rivelino Rigters knows at first hand the downside of incarceration. Fatherless and seeking the approval of older boys, he got caught up in drug-selling and theft, and was serving his first prison sentence at the age of 13. But prison only enhanced his criminal connections, he says. â€œI actually came out worse than before I went in.â€

â€œLocking someone up is not a way to solve the problem,â€ Rigters insists. â€œSometimes it only makes it bigger because, for some people, crime was either their last resort or there was no other way to make a living.â€ 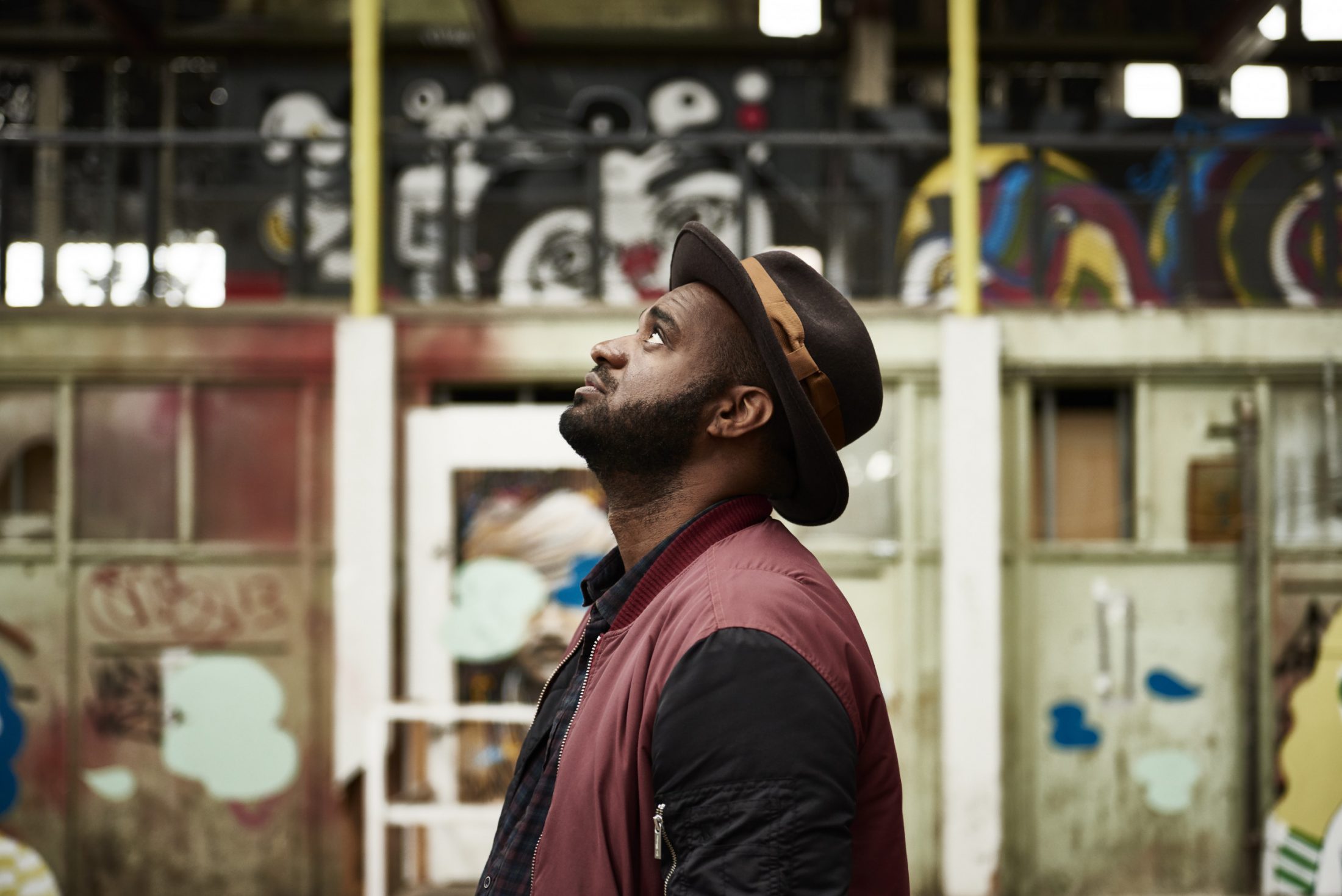 Instead, Rigtersâ€™ organisation Criminal Minded, which mentors current and ex-prisoners to access the skills and networks they need to rebuild their lives, is typical of the more personalised approaches now being trialled. It focuses on offendersâ€™ â€œstrengths, talents and possibilitiesâ€ and â€œwhat needs to be healed in order for them to take positive steps forwardâ€.

The prison-based model of justice may have served its time, believes Pakes. â€œWhat you find in the Netherlands when you talk to senior police officers, prosecutors or judges, is that very few people have anything positive to say about the effect of imprisonment,â€ he says. â€œNobody really believes it works.

â€œWe now know better that if you want to turn those lives around, simply being punitive is not going to cut it,â€ Pakes concludes. â€œIt needs something much more wholesome than that.â€

1. A night in the nick â€“ the hotel and restaurant

In the city of Roermond, buildings now occupied by the Hotel Het Arresthuis and its Michelin-starred restaurant Damianz formed a state prison from 1863 to 2007. It detained mostly drug smugglers and illegal immigrants in its final years. Grouped around original cast iron stairways and balconies, the rooms range from â€˜comfort cellsâ€™ to a luxurious suite. 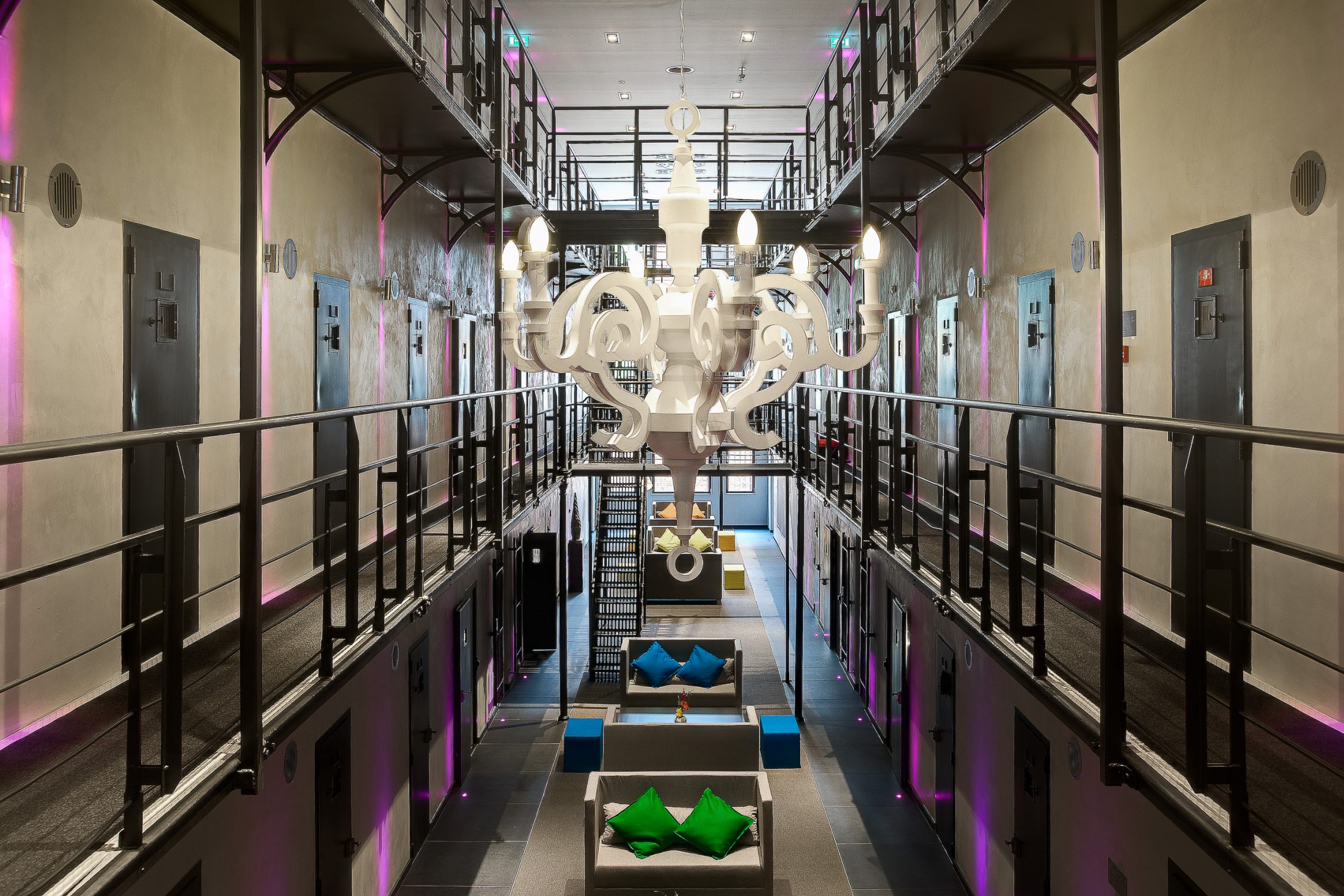 2. The lock-up thatâ€™s looking up â€“ the business centre and library

The moated entrance and formidable spires of the Blokhuispoort prison in the city of Leeuwarden now welcome visitors to a cultural business centre. Itâ€™s designed to boost investment in a province with the lowest GDP nationally. The Alibi hostel, with its barred windows, offers affordable accommodation, while the transformation of the prison chapel into the cityâ€™s central library was completed earlier this year.

Beneath the gigantic panopticon of Boschpoort penitentiary, a cast of 80 actors lead 400 â€˜inmatesâ€™ in orange scrubs through an adrenaline-filled escape experience. Elsewhere in and around the building â€“ rebranded the FutureDome â€“ spaces have been used as a meeting centre for people with autism, temporary housing, a pop-up theatre and an ice rink.

This article was published on December 7, 2021, by Positive.News.