When the natural world inspires engineering projects, the results can both protect us from climate impacts and center the needs of frontline communities. 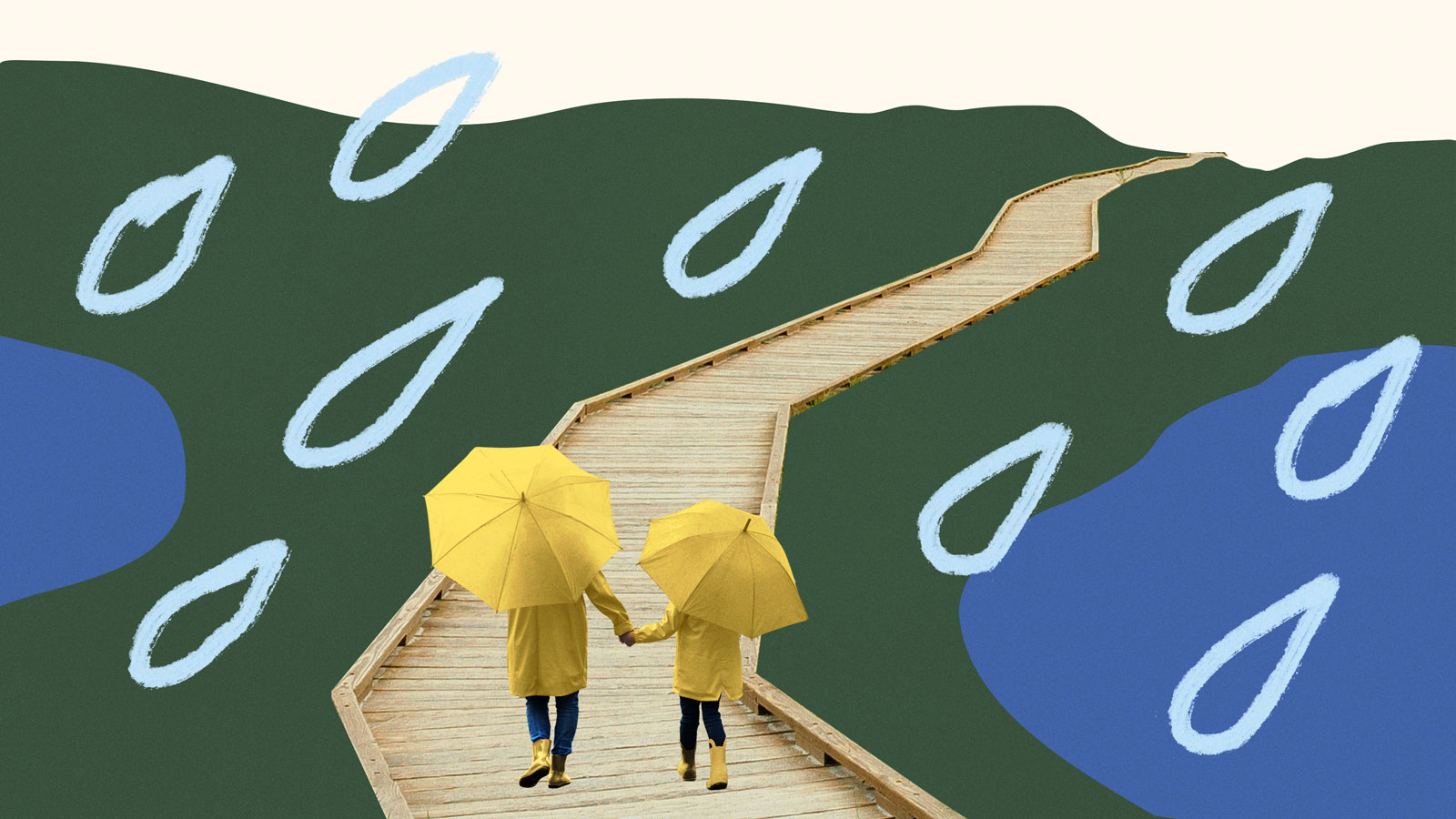 This story is part of Fix’s Outdoors Issue, which explores how we build connections to nature, why those connections matter, and how equitable access to outside spaces is a vital climate solution.

Marie Reed has always had trouble sleeping when it rains.

Growing up in Southbridge — a neighborhood in Wilmington, Delaware, about 5 miles from President Biden’s home and about 5 feet above sea level — Reed experienced bunking in the living room with her parents and eight brothers during storms, in case they had to flee to higher ground. Some downpours would call for a bucket brigade to bail out the basement. On rare occasions, stormwater mixed with raw sewage bubbled out of sewers and into streets and cellars.

For most of the six decades that she’s lived in the community, flooded homes, yards, and streets have been the norm. So when the remnants of Hurricane Ida caused dangerous flooding elsewhere in the city last fall, Reed was ready. “I was sitting here waiting,” she says. “I had my bag packed and everything.”

But something seemingly odd happened: Her street in Southbridge didn’t flood. The Christina River, which winds around the community, separating it from the rest of the city, didn’t swell from the storm like the nearby Brandywine River. About 2.5 inches of rain drenched the neighborhood, but this time there was a new natural space to capture the downpour.

Reed and others credit a $30-million wetland park with minimizing flooding from recent heavy rains by absorbing stormwater like a sponge. The park, which is expected to open to the public this summer, restored a 14-acre wetland and added a boardwalk that allows residents to watch wildlife, stroll to a nearby shopping center — and worry a little less about floodwaters.

Green infrastructure like the South Wilmington Wetlands Park reduces the risk of inundation and erosion during storms, while filtering pollutants, sequestering carbon, and providing recreation opportunities. Such projects use native vegetation, rocks, and even shellfish to replicate landscape features, such as the marsh that likely existed here prior to industrialization, when this area was tended by the Indigenous Lenni-Lenape people.

These solutions, which can be as small as a backyard rain garden, often are cheaper, more pliable in the face of environmental changes, and don’t tend to fail as catastrophically as “gray” infrastructure like concrete sea walls or sewers. In storm-prone areas and sea-level rise hotspots like the Mid-Atlantic and Gulf Coast, mimicking the natural world will be an essential tool for adapting to climate change, says Timon McPhearson, an ecologist at The New School and a lead author of the Intergovernmental Panel on Climate Change report.

Green infrastructure developed with community involvement also can foster environmental justice by mitigating the climate and health risks and other inequalities seen in low-income and Black and brown communities. As such projects become more common, some worry underserved and overburdened neighborhoods are being overlooked, raising the risk of “green gentrification.”

“Communities know what their problems are and have their own ideas about how to solve them,” he adds. “But if they’re not involved in the planning process, then their voices are not heard.”

Riffing on nature to, say, create wetlands, restore coastal shorelines, or expand green spaces, can reduce flooding, minimize heat islands, and provide access to natural resources and recreation like bike paths — often at a lower cost than traditional gray infrastructure. Involving residents in the planning, building, and enjoyment of nature-based solutions also gives them a stake in their neighborhoods, which can foster the feeling of environmental stewardship needed to support climate action, says Joshua Moody of the nonprofit Partnership for the Delaware Estuary.

“If you’ve got that good outreach, that good engagement with people, maybe it’s not just buying time at that point, it’s generating unseen human momentum,” Moody says. “Green infrastructure as a single tactic in a single place is definitely not the answer. How we completely redesign our landscapes is going to have the big impact.”

Just a few years ago, the site of the South Wilmington Wetlands Park was an eyesore, an expanse of long-abandoned mounds of dirt riddled with invasive plants and PCBs, heavy metals, and other carcinogens from the industrial waste dumped there over the decades.

Today, a boardwalk winds through a restored marsh where channels of water flow across the landscape toward the Christina River. Great blue herons and Canada geese have returned and dot the park, which is expected to officially open to the public this summer.

Although sea-level rise projections paint a dire picture for the city, Reed praises the park for alleviating flooding in Southbridge. But she says more must be done to address the environmental injustices in her neighborhood and others nearby. Especially in the wake of a 2017 report that found this area of Delaware faces a much higher cancer and respiratory-illness risk than most, residents like Reed are speaking up about how they’re tired of being a dumping ground.

“Everything over here is contaminated,” Reed says. With significant redevelopment investments being made in the city on the other side of the river, Southbridge residents want to make sure they’re no longer overlooked. The wetland project gives Reed hope that change really is coming.

“Of course, things are going to be happening within the state, within the city, and we have to have our plan together,” she says. “We’ve got our community plan, and what we want for the community is just a matter of working and executing it.”

Shifting to a ‘collective power’

Angela Chalk has spent almost a decade encouraging her neighbors in the 7th Ward of New Orleans to use green infrastructure, not only to protect their families from rising waters and temperatures, but also as a way to reconnect with each other and the culturally rich city they call home. But she believes respectful collaboration among residents, policymakers, academics, and community organizations is the only way to ensure such projects reflect the needs of communities of color throughout the city.

Like Reed, Chalk grew up in a city where storms demanded careful preparation. She remembers securing shutters and filling the bathtub and pots with water as a child while hunkering down inside. Her family rode out Hurricanes Betsy and Camille as they ravaged the city in the 1960s, and endured many other storms over the years. Such experiences are the norm for residents of New Orleans, a city that’s always been at war with water.

Historically, the city has relied on gray infrastructure like levees, flood walls, and pumps. But by the 1990s, such measures began showing their limitations. In the spring of 1995, when “a rain of biblical proportions” made it impossible for her to get home, Chalk realized that the city’s rapid development during her lifetime had caused more runoff and exacerbated flood risk, she says. Ten years later, Hurricane Katrina overwhelmed the elaborate system of levees and pumps, which failed to protect the city. That’s when people began to demand change.

New Orleans began embracing green infrastructure as a solution — not only to the chronic challenge of managing water in a city sinking below sea level, but to the environmental and social inequities of the region. It has spent more than $260 million on everything from the creation of neighborhood stormwater and flooding control systems to an investment in an 18-acre trail-lined park. New Orleans has also tapped those funds to support small rain gardens around the city.

City officials say the state also has made significant investments in both green and gray infrastructure to bolster coastal resilience. The federal government provided $141.2 million for the Gentilly Resilience District, which includes a water garden, wetlands, natural stormwater management systems, and other amenities in the neighborhood, which is bordered on three sides by water.

Resident-driven projects like localized tree plantings also have sprung up in neighborhoods throughout the city, including the 7th Ward, where Chalk now lives in a house her grandfather won in a card game in 1942. Chalk leads Healthy Community Services, a nonprofit that she founded in 2013 to teach residents about climate change and the need for infrastructure to mitigate it. The organization works with the community on projects like “green blocks,” in which people commit to keeping storm drains clear, using rain barrels, and more.Read more from the Outdoors Issue

Finding strength, and a calling, in a brood of eagletsRodney Stotts & Kate Pipkin

“The residents are the ones making these decisions to drive green infrastructure, because we can’t wait for government to respond to our needs,” she says.

Such efforts go beyond dealing with floods to include things like eradicating heat islands. Chalk’s group led a tree-planting project that reduced the temperature on several blocks by about 1 degree. Another project installed vegetation-lined drainage channels, called bioswales, that can handle 35,000 gallons of stormwater and reduce the risk of flooding, she says.

“We would be underwater waiting for government,” Chalk says. “Once people realize we have this collective power, it’s a whole different ball game.”

As residents become advocates for community-driven green infrastructure projects, they also take on the responsibility of educating their neighbors about the challenges a warming world presents. In doing so, they’re enlisting everyday people in the fight for solutions that benefit their communities. City officials and urban planners should heed their advice, because it often leads to better outcomes.

“Let them lead,” Chalk says. “They’ll tell you what they need in their community.”

Back in Wilmington, Public Works Director Kelly Williams concedes that the city has, in the past, failed to involve communities in such efforts from the start. That’s changing as the city strives to incorporate green infrastructure at every opportunity.

“No project is successful without direct — and I mean direct — community input,” she says. “It’s demanded. It’s not even an option.”

From her home in Southbridge, Reed says folks are making themselves heard and that she sees change coming. A condominium complex is going up a few streets over, and a senior living facility is in the works as well. She suspects the boardwalk through the wetland park will bring more people to the historic community locals know as a “cradle of African American political leadership,” because it was home to the first Black men and woman elected to the state legislature.

“It’s always been a good neighborhood. We stick together over here,” Reed says, sitting in a brown recliner facing photos of her family. What’s needed now that she’s retired and no longer knocking on doors and marshaling volunteers, she says, is for more people to get involved.

“We need some pep over here,” says Reed. “Don’t come out just when something bad is happening. Come out all the time.”

Maddy Lauria is a contributing writer to Grist.org.

← To What Extent Has Sexual Assault Become “the American Way?”
Protesters Take On NRA Convention After Texas Shooting →