Republicans are debating again tomorrow night. And once again, Americans will hear the standard regressive litany: government is bad, Medicare and Medicaid should be cut, â€œObamacareâ€ is killing the economy, undocumented immigrants are taking our jobs, the military should get more money, taxes should be lowered on corporations and the rich, and regulations should be gutted.

Republican Regression for the Rich

Four years ago the most widely-watched TV debate among Republican aspirants attracted 3.2 million viewers. This year itâ€™s almost twice that number. And for every viewer assume a multiplier effect as he or she shares whatâ€™s heard with friends and family.

Americans are listening more intently this time around because theyâ€™re hurting and they want answers. But the answers theyâ€™re getting from Republican candidates â€“ tripping over themselves trying to appeal to hard-core regressives â€“ are the wrong ones.

Need for a New Message… and Real Change

The correctÂ answers arenâ€™t being aired.

rty. So Republicans automatically get loads of free broadcast time to air their regressive nonsense while the Democrats get none.

But even if the President had equal time, the debate about what to do about the crisis would still be frighteningly narrow.

Thatâ€™s because the Presidentâ€™s answers donâ€™t nearly match up to the magnitude of the crisis.

Without bold alternatives, Americans desperate for big solutions are attracted to bold crackpot ideas like Herman Cainâ€™s â€œ9-9-9â€ proposal, which would raise taxes on the poor and cut them for the rich.

This is where the inchoate Occupy Wall Street movement could come in. Whatâ€™s needed isnâ€™t just big ideas. Itâ€™s people fulminating for them â€“ making enough of a ruckus that the ideas canâ€™t be ignored. They become part of the debate because the public demands it.

The biggest thing the President has proposed is a plan to create 2 million jobs. But thatâ€™s not nearly big enough. Today, 14 million Americans are out of work, and 11 million more are working part-time whoâ€™d rather be working full time.

The nation needs a real jobs plan, one of sufficient size and scope to do the job â€“ including a WPA and a Civilian Conservation Corps, to put the millions of long-term unemployed and young unemployed to work rebuilding America.

Iâ€™m not criticizing the President. Without energized, mobilized, and organized progressives, even the best people in Washington canâ€™t overcome the monied interests.Â For example, Americaâ€™s long-term debt needs to be addressed, but not the way the President is doing it. He wants to lop $4 trillion off the budget over the next ten years. This almost certainly means sacrificing education, job training, food stamps, and everything else now listed in the so-called â€œnon-defense discretionaryâ€ budget, as well as cuts in Medicare and Medicaid.

What about halving the military budget instead? It doubled after 9/11, and military contractors are intent on keeping it in the stratosphere. So is Secretary of Defense Leon Panetta. Result: Defense cuts this size wonâ€™t be on the table unless progressives vociferously demand it.

And what about really raising taxes on the rich to finance what the nation should be doing to create a world-class workforce with world-class wages?

Here again, the Presidentâ€™s proposal is paltry compared to what should be done. He wants to raise taxes on the rich by ending the Bush tax cut for incomes over $250,000 and limiting certain deductions. 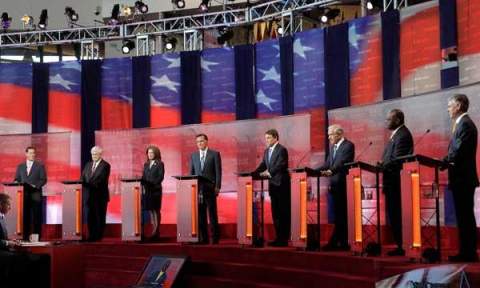 Yet income and wealth are now more concentrated than theyâ€™ve been in 70 years. The top 1 percent gets over 20 percent of total income and holds over 35 percent of national wealth; the richest 400 Americans have more wealth than the bottom 150 million Americans put together.

Time to Tax the Rich…

Meanwhile, effective tax rates on the rich are lower than theyâ€™ve been in three decades.

We need to push for higher marginal taxes on the top, and more brackets. Incomes of more than $5 million should be subject to a 70 percent rate. (The top marginal rate was never below 70 percent between 1940 and 1980.) And these rates should apply to all income regardless of source, including capital gains.

…Not the Poor and Middle Class

There should be a 2 percent annual surtax on all fortunes over $7 million. This would only hit the richest half a percent of Americans at the very top of the heap. And would yield $70 billion a year â€“ enough to improve our schools and make college affordable to everyone.

And a tax on financial transactions. Even a tiny one of one-half of one percent would generate $200 billion a year. Thatâ€™s enough to make a major contribution toward early childhood education for every American toddler.

The Presidentâ€™s healthcare law is a good start but itâ€™s not the solution, either. We need Medicare for all. Medicare has lower administrative costs than private insurers. And it has the bargaining heft to reduce drug and hospital costs as well as shift the system from fee-for-services to payments for healthy outcomes.

The Presidentâ€™s financial reforms are also a beginning but theyâ€™re way too weak to stop Wall Street depredations. (At this moment, for example, no one even knows the exposure of Wall Street banks to European banks and, through them, Europeâ€™s debt crisis.)

Banks are Not Too Big to Fail the Working Class

We need to resurrect the Glass-Steagall Act and break up the biggest banks.

The President has talked about fixing Social Security by raising the retirement age. But the best way to ensure the programâ€™s long-term solvency is to lift the ceiling on income subject to Social Security payroll taxes (now $106,800.) Yet this, too, is off the table.

Workers also need more bargaining power. The ratio of corporate profits to wages is now higher than itâ€™s been since before the Great Depression. Workers should be able to form unions through a simple up-or-down vote, without delay.

None of this is possible without strong and consistent pressure from the progressive side. Regressives are setting the agenda.

Climate Change Takes a Back Seat

The President isnâ€™t even talking about the environment any more. Yet climate change is a reality, and our survival depends on reducing carbon emissions.

We should tax carbon-based fuels, and divide the revenues equally among all Americans. Itâ€™s the best way to get us to switch to non-carbon fuels, and stimulate research and development of them. And by dividing the revenues, the typical American would come out ahead even though some prices would increase.

Finally, we need public financing of elections and strict limits on so-called â€œindependentâ€ expenditures. Corporations should have to get the approval of every shareholder before spending corporate funds â€“ the shareholdersâ€™ money â€“ on politics.

I have no idea whether the Occupiers will morph into the kind of progressive force necessary to put these ideas into play. But if Americans stand together and demand real reform, we can have a real national debate in 2012.

Tomorrowâ€™s Republican debate may attract lots of viewers. It need not capture their minds. Î¦

← We the 99% Demand a Totally Different Federal Budget
Despite Bombings & Beheadings, Stats Show a Peaceful World →

1 comment for “The Meagerness of the Republican Debates, the Smallness of the President’s Solutions, and the Need for a Progessive Alternative”