Something big is unfolding on campuses across the country this spring.

[In early April], twenty students from Swarthmore College launched a creative theatre action outside their administratorâ€™s office in Philadelphia to call out her shady ties to the fossil fuel industry — including to oil giant Exxon — that are clouding her judgment on divestment.

This marks the beginning of a national wave of campus action students are calling Youth > Fossil Fuels. Students are demanding that universities divest from fossil fuels once and for all, and reinvest in just solutions to the climate crisis. 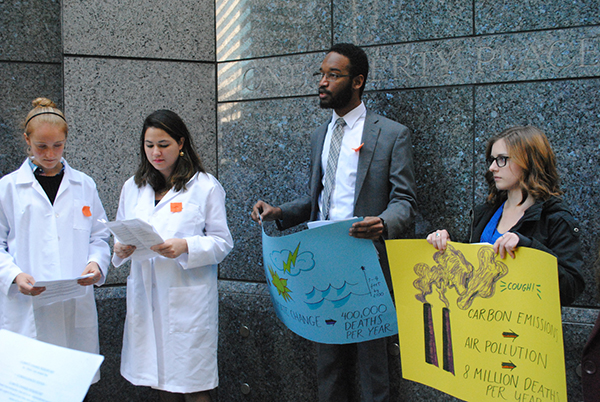 Swarthmore Board Member Rhonda Cohen is not the only university administrator with personal financial ties to the fossil fuel industry, and this spring students are exposing the dirt. Students are asking their administrators to pick a side: the people or the polluters. The fossil fuel industry that’s wrecking our communities — or the students, alumni, faith leaders, Nobel Prize laureates, and communities demanding that they get serious about the global climate emergency.

If youâ€™re a student, click here to take part.

For years students have pushed colleges and universities to divest from fossil fuels. Theyâ€™ve petitioned. Theyâ€™ve met with administrators. Theyâ€™ve demonstrated their power through rallies and marches. Last spring, they organized actions across the country — from sit-ins to teach-ins, and from blockades to breakfast actions. The first fossil fuel divestment campaign began at Swarthmore College six years ago, and the school still hasnâ€™t taken this step. Itâ€™s time for universities to choose the futures of their students over ties to the rogue industry that insists on digging us into a deeper and deeper hole.

Now, hundreds of students across the divestment movement are preparing to take part in a powerful, coordinated series of actions.Â These young people are more organized than theyâ€™ve ever been, with active networks in seven regions. They’re ready.

The fossil fuel industry faces an existential crisis right now — from collapsing oil prices, a new global climate deal, and an ever-growing movement calling for change. There has never been a better time to divest.

Will you join the national wave of action?

If youâ€™re student and ready to take bold action, make sure to sign up to get updates about exciting actions, organizing materials, and more ways to plug in.

P.S. We’re building a network of Fossil Free sleuths to dig up all the latest dirt on the top 200 fossil fuel companies — dirt that can help build the most powerful cases possible for divestment campaigns to stigmatize the industry.Â If you’re interested in volunteering to research a fossil fuel company in your region once a week for at least 30 minutes, join the Fossil Free sleuth team.Î¦

Katie McChesney is the US Deputy Divestment Campaign Manager for 350.org.

In the first of a series of nonviolent direct escalation, Swarthmore students call on controversial board members to recuse themselves from fossil fuel divestment conversation

April 7, Brooklyn, NY â€” Today, students with Swarthmore Mountain Justice, the first on-campus fossil fuel divestment campaign in the US, took action outside Board Member Rhonda Cohenâ€™s off-campus office calling on her to recuse herself from future conversations on fossil fuel divestment due to her significant personal financial ties to the fossil fuel industry.

This marks the first in a wave of nonviolent direct action over the next two months of students at colleges and universities escalating their fossil fuel divestment campaigns, reminding administrators, decision-makers, and leaders that Youth > fossil fuels.

â€œWe refuse to stand idly by as Swarthmore continues to align itself with an industry that is incompatible with our future,â€ said Sophia Zaia, a sophomore and divestment organizer with Swarthmore Mountain Justice. â€œBoard members canâ€™t make objective decisions on divestment when they have a personal financial stake in the future success of the fossil fuel industry. We have no choice but to escalate to ensure that the conversation on divestment, an issue that leaves us without a moment to lose, is transparent and free from compromising conflicts of interest.â€

After ignoring studentsâ€™ calls for recusal, Swarthmore students had no choice but to escalate. Rhonda Cohen also serves on the Board of Directors at the Glenmede Trust, whose third-largest holding is ExxonMobil. Students have also called on Board Member Emeritus Samuel Hayes III and Investment Committee Member Harold Kalkstein to recuse themselves from divestment conversations due to their significant personal financial ties to the fossil fuel industry1.

Students are taking bold action on- and off-campus in calling out conflicts of interest linked to the fossil fuel industry on their boards and to demand action on divestment. Just as the fossil fuel industry has held back meaningful climate action at all levels of government, personal ties to the industry hold back colleges and universities from taking the powerful action necessary to avoid the worst impacts of climate change.

â€œWe know that change will only come when we take the lead and push our institutions to stand on the right side of history,â€ said Julia Berkman-Hill, a divestment campaigner and leader with Bowdoin Climate Action. â€œAs long as Bowdoin refuses to move forward on divestment, we will continue to use our voices to show that we do not consent to the Collegeâ€™s relationship to this industryâ€™s inherently destructive business model. Our schools betray us when they invest in the exploitation and deception that the likes of Exxon and Big Oil perpetuate.â€

Reports from InsideClimate News and the Los Angeles Times revealed that Exxon knew about climate change since the 1970s. Instead of telling the truth and guiding the world toward a just and equitable renewable energy future, Exxon poured extensive resources into discrediting their own research and sowing doubt and confusion among the public and world governments.

â€œAround the world, those who have done the least to contribute bear the brunt of the worst effects of climate change. From Pakistan to the Philippines, climate change threatens the lives of frontline communities every day by actively making our planet uninhabitable,â€ said Sarah Jacqz, an organizer with Divest UMass. â€œAny action on climate is undermined if our institutions continue to invest in this rogue industry. It is high time that our institutions do everything in their power to tackle the climate crisis â€” Â that starts with divesting from fossil fuels.â€

To date, over 500 institutions representing more than $3.4 trillion in assets under management have committed to some level of fossil fuel divestment. While pivotal, the Paris agreement demonstrated the major gap between the words of politicians and their plans for action, as well as the power that the fossil fuel industry exerts in holding back meaningful climate action. Now, there is a global fossil fuel resistance fighting to Break Free from fossil fuels and push the world toward a just and swift transition toward a 100% renewable energy economy that works for all.

For students, personal ties to the fossil fuel industry among their schoolâ€™s decision-makers pose disturbing conflicts of interest that hold back colleges and universities from taking powerful action to avoid the worst impacts of the climate crisis.

â€œWe have made our choice clear, and we choose to stand on the side of a just and stable future,â€ said Zaia. â€œNow, weâ€™re demanding that our institutions of higher learning stand with us and make a choice: the future of a destructive, outdated and rogue industry or the future of your students?â€

NOTES TO THE EDITOR:

1 In addition to sitting on Swarthmoreâ€™s Board of Managers, Rhonda Cohen is on Glenmede Trustâ€™s Board of Directors. Glenmedeâ€™s third largest holding is its $219 million investment in ExxonMobil, who has been in the news recently following exposure of its extensive involvement in covering up the connection between fossil fuels and climate change, and its funding active funding of climate change denial.

As a Board Member Emeritus and former chair of Swarthmoreâ€™s investments committee, Samuel Hayes III has considerable influence on the Boardâ€™s investment decisions. Â Hayes also has a long-standing relationship with the fossil fuel industry, having served 20 years on the boards of the Eaton Vance family of mutual funds. Eaton Vanceâ€™s second-largest holding is its $845 million dollar stake in ExxonMobil. Eaton Vance has $2.6 billion invested in dirty energy, or eight percent of its $32.7 billion total holdings.

Investment Committee Member Harold Kalkstein was formerly a manager of the Boston Consulting Group (BCG) and founded its global energy practice. Â The BCG recently published a report advising the legalization of Arctic oil drilling and a repeal of the ban on crude oil exports. Â The BCG is also a paid advocate for oil companies. In 2012, the BCG was one of the highest-paid advocates for the Western States Petroleum Association, earning $648,875 that year for its advocacy.