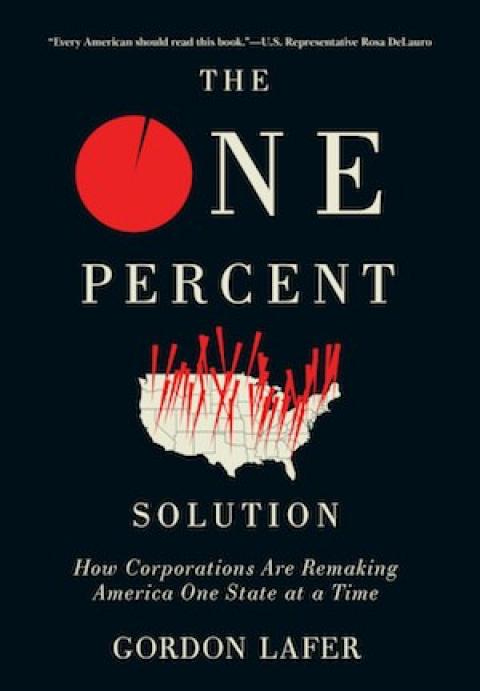 Thereâ€™s a top-down class war under way, but unlike the 1930s, when thugs shot workers on strike picket lines, todayâ€™s business organizations are using â€œhired gunâ€ lobbyists in state capitols, to rewrite the laws â€” all of them â€” in their favor.

Thatâ€™s the basic argument made by political scientist Gordon Lafer in his new book The One Percent Solution:â€ˆHow Corporations Are Remaking America One State at a Time. Lafer, who teaches at the Labor Education and Research Center of the University of Oregon, spent five years compiling a 50-state, 30-issue database of corporate-backed legislation. He was also there on the front lines, testifying against business-backed anti-worker laws in Wisconsin, Michigan, Indiana, New Hampshire, and other states.

The idea for the research came to him in early 2011. Lafer had just returned to Oregon after a year in Washington, D.C., as senior adviser to the U.S. House Labor Committee. Now a drama was beginning in the Wisconsin Legislature: A surprise attack on public sector workersâ€™ right to collective bargaining drew 100,000 protesters to the state capitol. Attacks on worker rights and protections soon spread to dozens of states.

â€œIt was like watching a million bombs go off in different places,â€ Lafer says, â€œand each one was being treated like, â€˜oh, this terrible thing is being done by senator so-and-so in New Hampshire.â€™ â€

Lafer set out to study the wave of anti-worker laws, and found distinct patterns among the hundreds of bills backed by business lobbies:

In almost no case were these laws crafted in response to public debate. Most often the politicians pushing them hadnâ€™t campaigned saying theyâ€™d do those things. In fact, most of the legislation was deeply unpopular, and in many cases, legislators brazenly disregarded democratic norms in order to pass them, rushing bills through in just days or weeks, with little or no hearing, sometimes restricting protesters from accessing the state capitol. Nor did the laws come about because hundreds of lawmakers came up with the same dozens of ideas on their own, Laferâ€™s research makes clear. They werenâ€™t responding to local conditions or local public opinion.

Rather, state politics is becoming nationalized. Instead of laboratories for democratic experimentation, state capitols are becoming factories, stamping out laws developed at the national level.

Central to that project is the American Legislative Exchange Council (ALEC), an annual convention and clearinghouse of model legislation, sponsored by some of Americaâ€™s biggest corporations.Â ALEC claims to be responsible for passing 200 bills a year in state legislatures. Leaked model legislation shows that ALECâ€™s ultimate goal is the elimination of minimum wage laws, unemployment insurance, food stamps, welfare â€” even license requirements for electricians and plumbers. ALEC is the most important organization in the movement, but itâ€™s not the only one. National and local chambers of commerce, the National Federation of Independent Business, and Koch-brothers-funded groups like Americans for Prosperity are all key players deploying enormous resources at the state level. The groups differ on some strategies and policies, but for the most part, they act in concert.

To make sense of their agenda, Lafer couldnâ€™t rely on the business groupsâ€™ official arguments, which as he details in the book, can be wildly contradictory. [ALEC, for instance, argues to state legislatures that workplace ergonomic rules should be set at the federal level, and at the federal level, argues that it should be left to the states.] Nor did Lafer feel he could take the groupsâ€™ professed â€œfree marketâ€ ideology at face value: Even political actors as supposedly ideological as the Koch brothers have shown a willingness to drop their free market principles when it serves their financial interests â€” slurping up federal oil and gas subsidies, for example, or coming out in favor of the bank bailout.

Instead, Lafer had to infer the groupsâ€™ motives by studying the bills they support. When he brought all its components together, the business groupsâ€™ ultimate goal became clearer: to â€œrestrict, weaken, or abolish laws governing wages, benefits or working conditions; to preempt, defund or dismantle every legal or organizational mechanism through which workers may challenge employer prerogatives; and to block, wherever possible, citizensâ€™ ability to exercise democratic control over corporate behavior.â€ Itâ€™s a dark vision, but it makes sense of the dizzying variety of corporate-backed legislation Lafer was documenting:

Why shrink government? Because regulation interferes with profit, and public services make the public less dependent on private employers.

Why reduce public employee compensation? Because thatÂ pushes wages down in the overall labor market.

Why eliminate the prevailing wage in public construction? Because it raises the economic expectations of non-union workers.

Why devote so much effort to weakening unions, when they represent just 7 percent of private sector workers? Because as, Lafer writes, the labor movement is the â€œprimary political counterweight to the corporate agenda on a long list of issues that are not per se labor-related.â€

What happened in Wisconsin was the prototype. Now, the same forces are close to being in complete charge of all three branches of the federal government. If Trumpâ€™s Supreme Court nominee Neil Gorsuch is confirmed, the court is likely to bar all public sector union dues requirements within two years. That could be followed by national â€œright-to-workâ€ legislation in Trumpâ€™s second term, and soon after, repeal of federal prevailing wage and other labor laws.

To defeat this agenda, workers will need to unify and organize. Laferâ€™s book couldnâ€™t be more timely.Î¦

Don McIntosh is the associate editor of NW Labor Press, an independent union-supported newspaper published continuously since 1900. This article was posted by Portside on April 5, 2017.

← This Is Whatâ€™s Really Behind North Koreaâ€™s Nuclear Provocations
President Trump: Toss Your Generals’ Escalation Plans in the Trash →