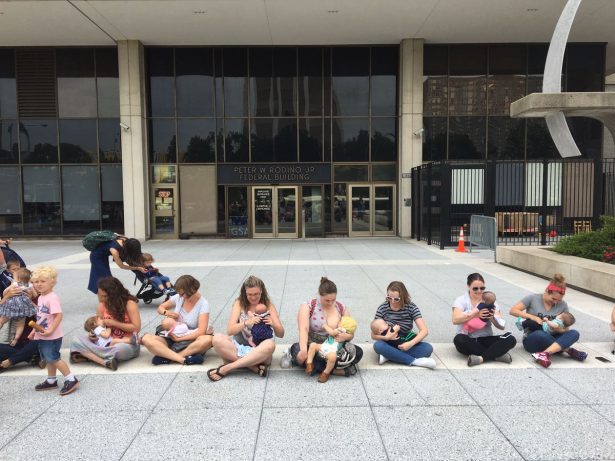 Quite suddenly, over the last week or so, something crucial has shifted in the mood of the grassroots resistance to Donald Trump. You can time it, more or less, to the release of that devastating recording of migrant children weeping for their parents after having been ripped from their arms, or the widely circulated photographs of children being held in cages. The unfolding horror of Trumpâ€™s family separation policy, and his administrationâ€™s plans for indefinite immigrant detention, is galvanizing people to fight back in a way that hasnâ€™t yet happened under this presidency â€” specifically, with mass direct action.

The scale of protest under Trump, thus far, has certainly been extraordinary. Researchers with the Crowd Counting Consortium have tallied more than 20,000 separate demonstrations over the period from January 2017 through May 2018, involving something on the order of 11 million to 16 million total participants. Thatâ€™s more people protesting than at any previous time in U.S. history, including the most tempestuous years of the Vietnam antiwar movement.

Whatâ€™s more, itâ€™s not just the size of these demonstrations thatâ€™s been unprecedented. Itâ€™s also their geographic reach â€” with protests being staged in record numbers of locations around the United States. A major day of action against Trumpâ€™s immigration policies is planned for this Saturday, June 30, with more than 600 demonstrations being staged all around the country, taking place in more than 80 percent of the nationâ€™s congressional districts.

Until now, though, protests against Trump have mostly been marches and rallies: legal, permitted events. There certainly has been some nonviolent direct action under Trump, but itâ€™s been fairly rare and small in size, particularly in relation to the vast number of people in the streets. In short, the resistance has been massive, but its character has been mild.

Itâ€™s suddenly ramping up, though, as a growing number of people are now ready to do more than march. In this new wave of direct action, as with every other aspect of the grassroots resistance to Trump, women are taking the lead. Parents with small children â€” mostly moms â€” have invaded the offices of the U.S. Immigration and Customs Enforcement, or ICE, in New York and Chicago to decry family separation and detention. Many more of these â€œplaydate protestsâ€ are planned around the country for the coming days.

Kids wrapped in thermal blankets occupied the Capitol rotunda in a parent-organized protest last week, and a group of 50 moms held a â€œnurse-inâ€ outside ICEâ€™s New Jersey headquarters. An Occupy ICE encampment in Portland has effectively shut down the local ICE facility since late last week, and similar encampments have sprung up in New York, Los Angeles, Tacoma and Detroit.

Most dramatically, a very sizable number of women have committed to engage in civil disobedience against Trumpâ€™s immigration policies in Washington, D.C. this Thursday, June 28, in a major action being coordinated by the Womenâ€™s March and the Center for Popular Democracy. Organizers arenâ€™t releasing signup numbers publicly, but the action is clearly shaping up to be â€” by far â€” the largest direct action to take place under Trump, and it could well be the largest womenâ€™s direct action in U.S. history. (Thereâ€™s still time to sign up and participate, and men are being encouraged to help with support roles.)

Much of the resistance to Trump has been focused, quite rightly, on electing a wave of Democrats to office this November. But the crisis around family separation and detention has underscored what scholars of authoritarianism already know: electoral work alone isnâ€™t adequate to counter an all-out assault on democratic norms and basic standards of human decency. The sudden uptick in direct action has already rattled Attorney General Jeff Sessions, who issued a warning over the weekend against disruptive protests targeting ICE. But the warning is unlikely to deter the women and men who are stepping up all around the country â€” too many people have reached their breaking point, and all the signs suggest the resistance will continue to rise.Î¦

L.A. Kauffman is a longtime grassroots organizer and author of Direct Action: Protest and the Reinvention of American Radicalism and the forthcoming How to Read a Protest: The Art of Organizing and Resistance. This article appeared on June 26 at WagingNonviolence.