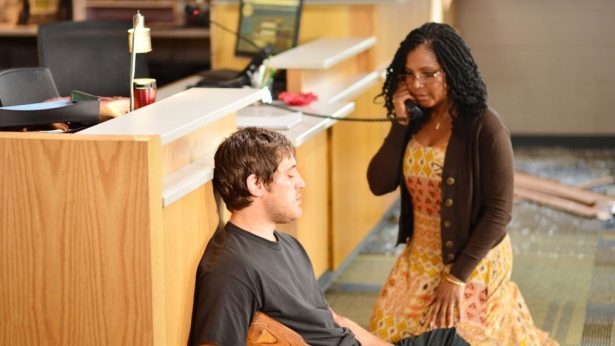 Toni Braxton as Antoinette Tuff in the Lifetime film â€œFaith Under Fire.â€

Nonviolence is spread out all around us, yet we so often fail to see how it can be used to stop some of todayâ€™s worst atrocities. Take school shootings, as just one example. Itâ€™s telling that the idea of arming teachers has been seriously debated in the media, while nonviolent approaches to conflict resolution remain largely unknown.

Thatâ€™s why the recent film â€œFaith Under Fire: The Antoinette Tuff Storyâ€ is so unique. It tells the true story of Antoinette Tuff, an elementary school accountant in Decatur, Georgia, who prevented a mass shooting in 2013 by talking would-be killer Michael Hill into putting down his assault weapon. Hill had slipped into the school with an AK-47 and hundreds of rounds of ammunition, announcing that â€œeverybodyâ€™s gonna die today.â€ But thanks to Tuff, none of the 841 young children â€” â€œmy babiesâ€ as she calls them â€” were harmed.

While the event got some fairly intense media coverage when it occurred five years ago, one network â€” in a perfect example of the distorted lens through which we see the world â€” actually pulled the story because nobody got killed. Yet, itâ€™s precisely the cases where nobody gets killed that teach us about the resources of the human spirit and their ability to save us from the scourge of violence.

â€œFaith Under Fireâ€ deserves credit for shining a light on this unfortunately timely and teachable true story â€” as does Toni Braxton, who turned in a great performance as Antoinette Tuff. Whatâ€™s more, the film maintains acute tension for almost all of its 90-minute run â€” right up to the happy conclusion, where Michael Hill puts his weapon on Tuffâ€™s desk, lies face down on the floor and tells her she can call the police. As far as I know, the film hardly changes anything about the actual event â€“ nor does it need to. This was one of the more incredible, and overlooked dramatic confrontations of our day. Its sensitive treatment of race issues (Tuff being black and Hill white) is also much appreciated.

The only problem with â€œFaith Under Fireâ€ is what it doesnâ€™t say. To begin, it didnâ€™t quite bring out what Tuff actually said to Hill. In the 911 calls, she can be heard making use of an age-old script for exhorting people to pluck up their courage and desist from an unwise course. This script was so common â€” and so effective â€” that it was actually named and formalized in ancient times (the Romans called it a consolatio).

It more or less goes as follows: First, you acknowledge, with sympathy, the distraught personâ€™s mental state. Then you show how you, too, have similar difficulties. Next you remind the person that things will not always be this bad. And, finally, you urge him or her to do something. It seems to me this script, or parts of it, can be learned and put to work in any number of situations to defuse potentially violent interactions. Of course, to be learned, it needs to be taught.

Another error of omission in the film stemmed from its depiction of what gave Tuff the strength to do what she did in the ordeal, which went on for hours. The film set it down to faith in God â€” which is true as far as it goes â€” but Tuff herself has cited a kind of centering activity her pastor had taught her. In other words, it was more like a spiritual practice instead of, or along with, that faith. Faith is one thing â€” you either have it or you donâ€™t. But spiritual practice is something anyone can do. So, again, it was a bit of a lost teaching opportunity.

The most important missing item, however, was an open acknowledgement of the things that failed to save the children: security gates, police, and a SWAT team. Perhaps itâ€™s implicit in the way the film upholds Antoinette Tuff, as a sensitive, compassionate, brave human who saved children. But implicit isnâ€™t quite enough. A profound lesson seems to be lurking here â€” namely that the human capacity for nonviolence is a more powerful way to achieve security than the institutions and paraphernalia weâ€™re trying to rely on today.

That realization would reach far beyond school shootings or, in fact, any kind of individual encounter. Think of how the world slept when refugees streamed out of Iraq in the 1980s, asking for help with their civil resistance against Saddam Hussein. If we had heeded their appeal, it could have spared us the untold ongoing misery still being inflicted on that country. Or what about when the world slept in 1972, during a major nonviolent uprising in Pakistan that failed for want of any recognition, not to mention support from the international community? Or what about when it failed to notice an extremely courageous, determined nonviolent resistance going on in Kosovo in the 1990s, until armed fighters appeared on the scene? The list goes on and on. To paraphrase President Kennedy, those who ignore nonviolent moments will live in a violent forever.

But letâ€™s not do that. Letâ€™s think right here for a moment about what we could do, as individuals or through institutions, to get to a world where nobody gets killed because the lessons of nonviolence going on all around us (as they do) are noted, understood and developed. The first thought would be, of course, the media. Most of us are not journalists, but every one of us is a consumer of journalism â€” and therein lies our leverage. If they ignore nonviolence, we should ignore them. Individuals and groups use this tactic with the media and their corporate sponsors frequently with telling effect. Whatâ€™s more, weeding out the sensationalizing mirror of violence to get real stories of human courage and creativity â€” aka nonviolence â€” can have a healthy effect on our own mindset, which in turn influences the mindset of the world around us.

Nonviolence is everywhere, but itâ€™s beneath our radar. We have to be proactive and learn everything we can about it, then be our own news channel to disseminate and interpret its unfolding events. Peace scholar Johan Galtung talks about the â€œgreat chain of nonviolenceâ€ by which people who have no direct access to policymakers (like most of us) often have indirect access â€” whether we know it or not â€” through a ladder of connections, on up the line to the so-called high seats of power. Whether we have them or not, however, every one of us influences her or his surrounding culture.

Two other lessons would seem to build directly off Antoinette Tuff and the way she was prepared, without realizing it, for her confrontation with destiny. First, get trained in nonviolent practices that can help you deal with all kinds of interactions, some of them difficult (check out the nonviolence training hub). Second, back it up with a spiritual practice. We may never have to confront a mass murderer (Inshallah), but we all can and must work on a culture bringing mass murder into our troubled world.Î¦

Michael Nagler is Professor emeritus of Classics and Comparative Literature at UC, Berkeley, where he co-founded the Peace and Conflict Studies Program. He is also the founder of the Metta Center for Nonviolence and author of the award-winning Search for a Nonviolent Future.This article appeared on July 3rd at Waging Nonviolence.

← Trump’s Getting Us Ready to Fight a Nuclear War
Trumpâ€™s War on the Poor: An Impeachable Offense →