When I read this in the morning paper, my heart stopped: Just 40 minutes away from me, the white mother of black children in New Jersey was repeatedly harassed via Facebook by a stranger, who told her that her children should be hung.

Kentucky police arrested the young white man on Oct. 18, as he was backing out of his driveway with weapons, 200 rounds of ammunition and plans for shooting up a nearby school. The authorities thanked the mom â€” Koeberle Bull of Lumberton, New Jersey â€” for alerting them.

Iâ€™m the white grandfather of a family of mostly black children. Someone armed and active is so offended by a mixed-race family that he wants to kill children like mine. Supported by my white daughter Ingrid, I allowed the terror to move through me while I raged and cried.

After a while, when the intensity of my feelings lessened, Ingrid asked, â€œIsnâ€™t it time to go on the offensive against racism?â€

I needed to access positive energy. While I was still identifying with the New Jersey mom and immersed in the feelings of fear, the ideas running through my head were all about defense.

Thatâ€™s the intention of terror, after all, whether itâ€™s expressed in packages of bombs sent to prominent people or conducting a massacre in a Jewish synagogue in Pittsburgh. I was gripped by my human programming: When under attack, defend! 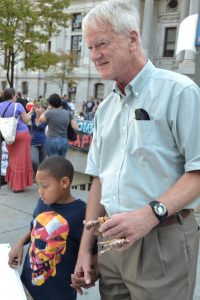 George Lakey with his great-grandson Yasin at Occupy Philadelphia in 2011. (WNV / George Lakey)

When I released enough fear to be able to think again, I could hear Ingridâ€™s question and access my strategy brain. Strategy urges the opposite of fearâ€™s reactivity. Mohandas K. Gandhi, observing Indians reacting against the British Empire, urged his people to go on the offensive. Military generals agree with Gandhi: Wars canâ€™t be won by staying on the defense.

For its part, folk wisdom couldnâ€™t be clearer: â€œThe best defense is a good offense.â€

Despite this, many Americans at this moment â€” perhaps especially activists â€” are locked into reactivity and defense. I see the resulting frustration when I observe activists attacking each other. Going on the offense has different outcomes: It builds healthier movement cultures and shifts our focus to winning over allies in an expanding struggle.

I often heard Bayard Rustin, a senior strategist for Martin Luther King Jr., say at the height of the civil rights movement, â€œWeâ€™ve got to change our economic system or in 50 years weâ€™ll still have ugly racism!â€

But what does polarization have to do with the violent expression of racism?

Even though racism is an integral part of American culture, how strongly it is felt and expressed varies on a spectrum, from subtle stereotyping and microaggressions on one end to the would-be Kentucky shooter on the other. That means there is always some racial hatred around; we need to just face that. What usually keeps people from violently acting out their hatred is the social context.

Polarization releases people to act out their hatred. In the 1920s economic inequality deepened, polarization grew, and the Ku Klux Klan was everywhere. Itâ€™s not only racism thatâ€™s released by polarization. As society heats up movements on the left grow, too. Thatâ€™s why we saw powerful movements for progressive change in the 1930s, even while the American Nazis were busy recruiting.

The biggest mistake 1930s activists could have made was going on the defensive because, as it turns out, it was exactly the time to go on the offensive. Thankfully, thatâ€™s what they did. The result was the biggest decade of gains for American progress in the first half of the 20th century. Historic breakthroughs on racial integration of industrial unions were made in that very period.

In the 1960s, bombings of Mississippi black churches became epidemic, along with killings of black people and their white allies â€” even in broad daylight. Nonviolent civil rights leaders understood this dynamic. King and his comrades were clear that the remedy is to take the offensive, and the movement won gains that, at the time, appeared to be impossible. The economic emphasis of Rustin and A. Philip Randolph also gained support. The 1963 March on Washington â€” dreaded by President John F. Kennedy and most Democratic Party leaders â€” significantly named itself the March for Jobs and Freedom, attracting significant trade union support.

King modeled for all of us what offensive strategizing looks like, as illustrated in the outstanding film Selma. He felt his feelings about the latest outrage, but instead of letting his feelings control his behavior he channeled the energy into action aimed at changing institutions. The more that vicious attacks targeted him and his people, the more clearly he saw that injustice is reinforced by the economic structure. Increasingly he linked racism and poverty to capitalism.

As the current political turbulence swirls around us, the need grows for models of grounded campaigns that take the offensive and make the racial and economic connections. One example is the Power Local Green Jobs campaign in North Philadelphia, which incorporates a strong racial and economic justice dimension.

Most activists can find ways to connect the dots even if their primary issue is gun control, sexism, incarceration, rights for trans people, peace or raising the minimum wage. Progress on many issues is opposed by the economic elite, whether acting through Donald Trump or Congress or state governments. The only way to break this opposition is to push the economic elite out of its position of dominance, so we can make the required changes toward equality (both economic and racial) and enjoy the social peace that results.

Three Steps Help Put Us Back on the Offensive

The good news is that activists, by taking three strategic steps, can dramatically increase our power and effectiveness. The steps are not rocket science â€” in fact, they are perceived by people outside the activist bubble as common sense steps to take.

1. Shift away from reactive, one-off demonstrations. Protests can be emotionally satisfying, but they rarely produce change. Again, the black-led civil rights movement showed its strategic brilliance by focusing on campaigns rather than episodic protests. A campaign has a specific demand for change, a target (the deciders who can yield to the demand) and an escalating series of actions that build the campaign. Campaigning doesnâ€™t guarantee winning, but it increases the chance of success from near-zero using one-off demonstrations to a chance thatâ€™s better than even.

2. Link the network of campaigns on an issue into a movement. That movement can result in the movement winning in the big picture, even if some specific campaigns within the movement donâ€™t win. The military analogy is that generals donâ€™t expect to win every battle, but if they retain the initiative they do expect to win the war.

Linking campaigns into a movement also promotes the learning curve of the campaigners, by comparing themselves to each other. They learn how to figure out the opponentâ€™s vulnerabilities and how to sustain themselves over time.

3. Create a vision of what justice looks like. While the Occupy movement changed the conversation, it was held back partly by its lack of a concrete vision of what should replace the unjust status quo. Fortunately, the Movement for Black Lives issued a vision draft in 2016 that has gathered endorsements by many national and grassroots groups.

The hope for a movement of movements that can amass enough power to push the 1 percent out of dominance lies, I believe, in taking at least these steps. A series of nonviolent direct action campaigns that stay on the offensive can build vision-led movements that â€” finding themselves facing the same opponent â€” create a coalition and win.

That is the shift that can make possible, at long last, a decisive win against racism.Î¦

George Lakey has been active in direct action campaigns for six decades. Recently retired from Swarthmore College, he has facilitated 1,500 workshops on five continents and led activist projects on local, national and international levels — most recently with Earth Quaker Action Team. Among many other books and articles, he is author of â€œStrategizing for a Living Revolutionâ€ in David Solnitâ€™s book Globalize Liberation (City Lights, 2004). His 2016 book is Viking Economics, and in December 2018 Melville House will release How We Win: A Guide to Nonviolent Direct Action Campaigning. This article appeared on October 29 at WagingNonviolence.

← All Wars are Illegal so What do We do About it?
Trust with US must be Built before Korean Peninsula can be Reunited, DPRK Insists at UN →