Coming home from the Forever War can be difficult. Not long after returning from Afghanistan as a Marine officer in early 2011, I found myself feeling betrayed by compatriots who worshiped the idea of my service while refusing to confront what that service entailed. There is a chasm of awareness that often exists between veterans and civilians, especially during an age in which an all-volunteer military prosecutes never-ending wars, and in which those Americans who end up experiencing combat prove statistically negligible.

It isnâ€™t so much a chasm of awareness as a chasm of memory. The problem with veterans is we keep remembering our wars when we are supposed to join everyone else in forgetting them. Today I experience that gap most viscerally in politics, and liberal or progressive politics in particular, where celebrated commentators like Rachel Maddow and Lawrence Oâ€™Donnell fail to cover Americaâ€™s ongoing wars and the role some of their favorite guests have played in launching and expanding them.

The fact that those same Bush-era officials and pundits have now become heroes among partisan Democratsâ€”the fact that the late John McCain, arguably Americaâ€™s most enthusiastic warmonger, has now become something of a liberal patron saintâ€”drives me toward despair. It is not as if my sense of hopelessness emerged from a vacuum. By the time I was discharged from the Marines in the late spring of 2011, President Obama had already caved to the militarists on Libya and the drone war, was beginning to double down on an unaccountable surveillance state and was waffling on the closure of the GuantÃ¡namo Bay detention camp. He would soon back Saudi Arabiaâ€™s war of aggression in Yemen, a war many now consider genocidal. On the other hand, Obama executed significant troop withdrawals in Iraq and (eventually) Afghanistan, and he served as a comparatively dovish voice on Iran, Syria, and Russia. He was no ally to the Palestinians, yet his relationship with Prime Minister Netanyahu was icy. He also tended to keep his distance from the neoconservatives responsible for so much of the chaos in the Greater Middle East. At the very least, he didnâ€™t go out of his way to revive their influence. 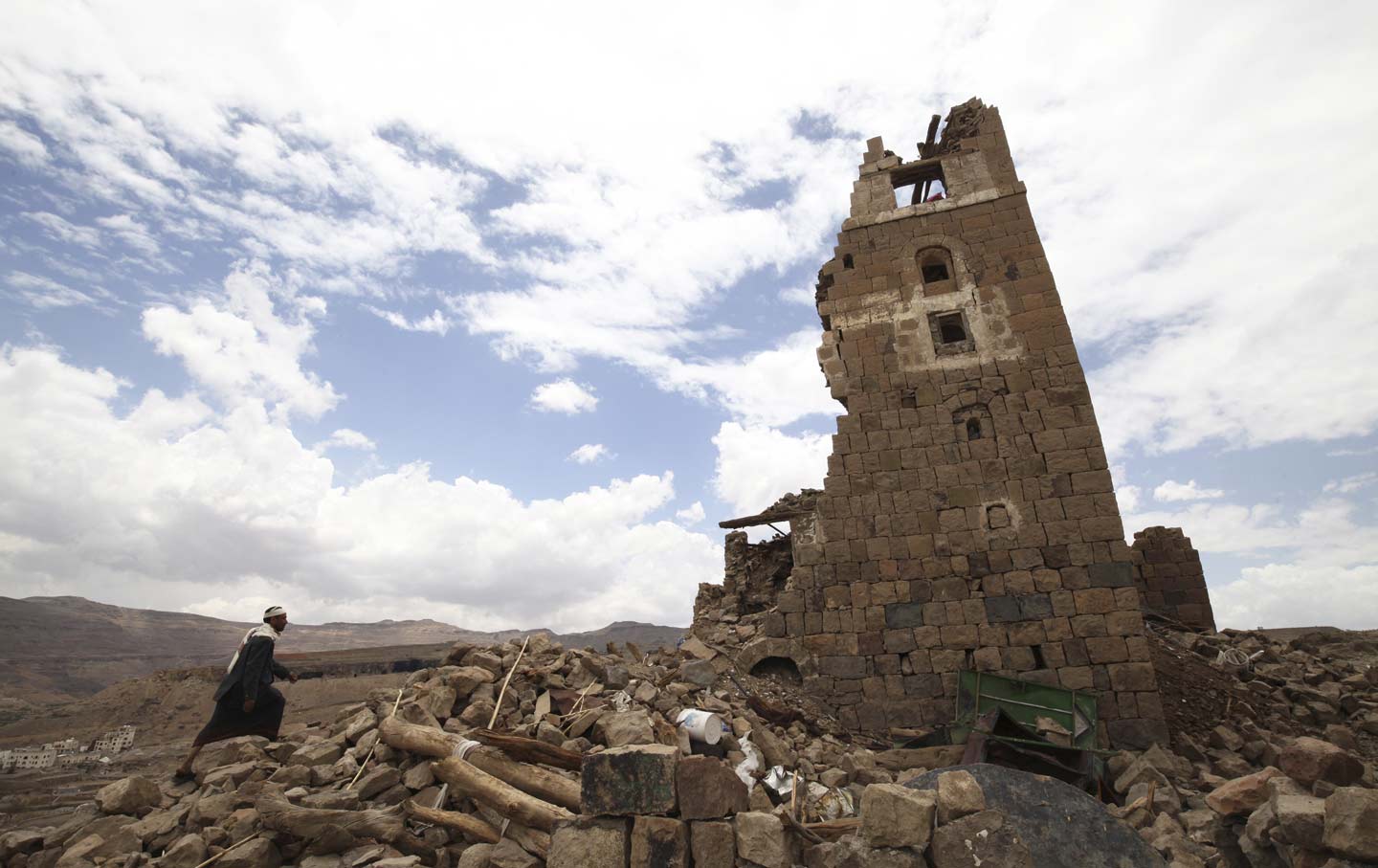 All this began to change during the 2016 Democratic primary, when the Clinton campaign made a conscious decision to align with the neocons in the lead-up to its bout with Trump. Clinton herself had always been a hawk, and she had frequently seen eye-to-eye with Bushâ€™s war cabinet, but the threat of a Trump presidency during the general election, and the Russiagate mania that followed Trumpâ€™s victory, propelled Clinton and the Democrats to make the alliance official. During the race, the Clinton team courted Robert Kagan and others from the Weekly Standard crowd, who were likely drawn to Clintonâ€™s willingness to ratchet up the air war against the Putin-backed Assad government in Syria, arm anti-Russia elements in Ukraine, tighten relations with Israel and the Gulf states, and maintain a belligerent posture toward Iran. After the race, high-level associates of both Clinton and Obama joined forces with the neocons to form an advocacy group, Alliance for Securing Democracy, whose tag line now reads, â€œPutin Knocked. We Answered.â€ The bond has only grown more pronounced as the months have progressed, leading one of the only prominent Iraq War supporters to have learned his lesson, Peter Beinart, to conclude that â€œon foreign and defense policy, the [Democratic Party] barely exists.â€

It is one thing to welcome investigations into Russiaâ€™s involvement in the 2016 election, and to push for electoral and anti-corruption reforms that might help prevent such interference in the future. It is quite another to allow some of the worldâ€™s most fervent jingoists to assume the vanguard of the anti-Trump opposition, and to allow their politics to influence and define the language of the liberal and progressive left. We are living in an ominous moment when it is Democrats who are the most inclined to charge those who disagree with them on the Russia media narrative of treason, and when it is Democrats who are the most inclined to accept declarations or demands made by a defense establishment that apparently can do no wrong.

I would like to think this ideological shift would have stunned me regardless, but my personal journey has made it all the more shocking. There is something surreal about watching so many Democrats and liberal or progressive pundits adopt the ugliest rhetorical tics of the very post-9/11 chauvinism I once found myself immersed in, from seeing anyone or anything inconvenient to the presiding account as fifth-columnist to treating the utterances of spies and other military-industrial propagandists as gospel. Most of all, there is the ostensible disregard for the consequences of their newfound animus toward the national-security stateâ€™s latest bogeyman.

When Obama left office, the defense budget was already higher, in inflation-adjusted dollars, than any other time since World War II. As Beinart notes, it was higher than at the peak of the Vietnam War or the Reagan expansion. In the past two years, however, both parties have managed to swell its size even further, with the Russian and Chinese threats serving as convenient pretexts. These budget increases represent hundreds of billions that could have been devoted to more effective and humane efforts. But whether it is through taxpayer-funded military assistance or taxpayer-funded subsidies to arms dealers, these increases, combined with an ever-increasing slew of US-approved arms deals, will almost certainly lead to more suffering and risk around the world.

This includes escalating tensions around Russiaâ€™s periphery, in large part by arming and funding governments and groups inÂ Ukraine, Poland, and elsewhere that have extensive ties with white nationalists and fascists. It includes continuing to arm and fund Saudi Arabiaâ€™s massacre in Yemen or Israelâ€™s occupation of Palestine. It includes more torment in Syriaâ€™s civil war, a war that experts thought was drawing to a tragic but necessary close in 2016, just before anti-Russian sentiment was kicked into high gear. It includes the additional feeding of an unparalleled US-led global arms trade that will likely instigate violent outbursts in unexpected corners of the world. It includes a related arms race in surveillance and cyber-technology that will probably put added strain on an already fraying liberal-democratic fabric. Most frightening of all, it includes an anteing up of the nuclear arsenal.

What is needed now is a clear alternative to the present course. Liberals and progressives should be insisting on diplomacy and partnerships with Russia, akin to the Iran deal or Nixonâ€™s trip to China. They should be educating the public on how the United States and its allies violated a 1990 promise to Russia not to expand NATO eastward. They should be speaking about how the US government, following the end of the Cold War, trumpeted triumphalism, helped impose shock therapy, cheered the privatization and selling off of key industries to disastrous effect, eviscerated the economy, threw their weight behind their favored candidate in Russiaâ€™s 1996 presidential election, and laid the groundwork for the rise of Putin and the oligarchs. They should be quoting the economist John Maynard Keynes on the hazards of punitive politics or the diplomat George Kennan on the dangers of NATO-related hubris. They should be fleshing out a grand bargain that involves a mutual exit from Syria, cessation of hostilities in the proxy war between Iran and Saudi Arabia in Yemen, mutual noninterference on Russiaâ€™s periphery, the halting of NATO expansion (if not its rollback), and investment in a green Marshall Plan linked to the rebuilding of regional economiesâ€”all conditioned on staged movement toward nuclear disarmament, the dialing down of the arms race, substantive democratic reform, and the reining in of the global plutocracy. This approach toward Russia, finally, should be embedded within a wider left-internationalist agenda of shared peace, prosperity, and environmental stewardship.

This would all make for an ambitious (some might say quixotic) reversal, and there is no denying the inevitable obstacles, from institutional inertia to the shortsightedness of great-power politics. But to conclude the status quo offers the safest bet is to surrender to what the sociologist C. Wright Mills once dubbed â€œcrackpot realism.â€ It is to forget the endless war already consuming us, and it is that very forgetfulness that constitutes our gravest threat. The left must counter such amnesia with thoughtful and bold geopolitical imagination.Î¦