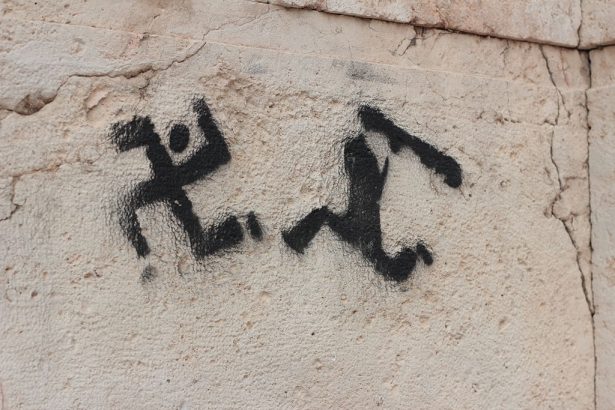 In front of a standing-room-only crowd at the Howard Zinn Book Festival in San Francisco earlier this month, historian Mark Bray and I debated the value of using violence to quell the growth of neo-Nazis and white supremacists. Anti-racism trainer Molly McClure was the moderator.

We received a good deal of appreciation for the chance to hear, in the same space, two different perspectives, shared by mutually-respectful activists who were interested in shedding more light than heat.

Dealing with fascists is a very big subject for a short article, so Iâ€™ll use the frame that Mark and I used that night, which was to try to avoid global, abstract generalizations in favor of speaking to a few strategy issues that are of pressing concern right now. We mostly used historical examples as resources to help us think about what all of us face in the present. Markâ€™s views can be found in his 2017 book â€œAntifa.â€

The growth of polarization makes it possible for haters to come out from the margins, form larger groups and make political trouble. Why is polarization increasing now, with the accompanying growth of fascist groups?

A trio of political scientists found that polarization is driven by economic inequality. The inequality is generated by the policies of the economic elite, the 1 percent who dominate our country. The more inequality, the more polarization and â€” therefore â€” the more trouble from neo-fascist formations.

Billionaire Warren Buffett let the cat out of the bag when he revealed to The New York Times in 2006 that the 1 percent has been waging, in his words, â€œclass war.â€ As I see it, thatâ€™s been going on at least since the presidency of Ronald Reagan. Some young working-class white men are manipulated by the results of that class war â€” and our countryâ€™s racism â€” to respond by joining the Ku Klux Klan and other groups.

In other words, the cause of rising fascism is the economic elite and its wish to take more and more of the countryâ€™s wealth for itself. Economist Elise Gould tells us that â€œThe gap between those at the top and those at the middle and bottom has continued to increase through much of the 2000s.â€

Antifa focuses on fascists as our enemy, but that is mistaking the symptom for the cause. The fascists are mostly people on the margins who have no say about whatâ€™s hurting them and mistakenly believe their enemies are immigrants, blacks, liberals and Jews. I believe the real perpetrators are super-rich conservatives, libertarians, and Democrats who agree that neo-liberal economic policies are a good thing and that they can live with the â€œunfortunateâ€ consequences â€” which not only hurt the rest of us (including members of the Ku Klux Klan), but also the planet and its ability to sustain us.

To reverse course and put our country on what the civil rights movement called â€œthe Freedom Road,â€ we need to upset the dominance of the economic elite. That requires building mass movements that learn, as they grow, the necessity of nonviolent revolution. My new book â€œHow We Winâ€ describes how to move more quickly in that direction.

A Model for Success amidst Nazi Threats

The growing economic inequality of the 1920s resulted in increased political polarization in Sweden and Norway â€” just as it did in the United States during the same decade. The extremes at both left and right grew, including the Nazis.

As with German Nazis and Italian Fascists of the same period, the right-wing extremists of Sweden and Norway wanted to use violence to dominate the politics of their day. It must have tempted the growing left movements of Nordic farmers and workers to preoccupy themselves with the Nazi threat. The Scandinavian left had even more to fear because the Nazi ideology contained an appeal to ancient Scandinavian myths and the â€œheroic Aryan bloodâ€ of the Vikings.

Instead, the Nordic left movements kept their focus on the real perpetrators of inequality and injustice. The left aimed at pushing the economic elite off their pedestals, and they succeeded despite the violence the elite used to protect their privilege. As Iâ€™ve described in my 2016 book â€œViking Economics,â€ the Scandinavian left pulled off the closest thing yet to a democratic revolution that changed class power relations and installed an alternative economic model centering the worker instead of capital. And they did it with a brilliant multi-dimensional strategy that featured nonviolent struggle doing the heavy lifting.

In the meantime, the left in Germany and Italy got distracted by the right-wing extremists. Historian Laurie Marhoefer describes the violent leftist response to Nazi provocations in Germany. Battles between left and right inside taverns surged into the streets. The German middle classes became alarmed at the rising amount of violent chaos and went along with their economic elitesâ€™ decision to hand state power to Adolf Hitler.

A similar dynamic happened in Italy, where the rising violence between left and right led to the appointment of fascist Benito Mussolini to lead the government. After all, in a period of polarization and insecurity, â€œwe need law and order,â€ right? Give the state, the elite reasoned, to the party promising law and order â€” big time!

I sometimes think the smartest thing the Swedish and Norwegian left did was to avoid getting baited by their Nazi antagonists into street-fighting and mounting chaos. Instead, they modeled self-discipline and used the disruptive, nonviolent power of noncooperation to force a power shift. They also projected a vision to show how the new economy would work for the common good, winning in the process more and more allies, including members of the fearful middle classes.

Since the United States faces increasing chaos â€” guaranteed by random violence and climate disaster, along with polarization â€” we should hold this successful model in our minds as we figure out what to do.

From Reactivity to Pro-Activity

While touring the country the past couple years, Iâ€™ve seen an enormous amount of reactivity among progressives. Many closely follow media that dwell on bad news, trying to respond to a dozen issues at once, competing for political correctness, scattering their energy, and â€” no surprise â€” becoming depressed.

Thatâ€™s the opposite of what works for making progressive change.

Antifa offers one more rationale for reactivity: Doing quick mobilizations against right-wing extremist groups that announce a plan to rally. Not only does that reactivity subtract energy needed to build winning campaigns that build movements, but it can also lead us into traps.

In November, activists in Philadelphia heard through social media that the Proud Boys were coming to hold a rally. About 40 right-wingers showed up and made speeches â€” a non-event, a failure, in no way worthy of mass media coverage.

However, hundreds of progressives showed up, transforming the non-event into political primetime for the right wing. The Philadelphia Inquirer, normally a daily newspaper reluctant to cover street demonstrations, published an enormous article containing six photographs (two in full color) and over 20 column inches of text. The bonus for the right-wingers was that the conflict did turn physical and at least one of them was hurt, fitting nicely into the playbook on the right that they are â€œpoor victimsâ€ of the liberal elite and deserving of sympathy.

In effect, the progressives gave the right-wingers a victory. A newspaper reader could easily conclude that the extremist right must be consequential â€” otherwise they wouldnâ€™t have received so much attention. And attention only adds more fuel to the fascistsâ€™ fire.

Economic polarization enrolls alienated working-class white men to the extremist right, where they are led by bullies who rise to the top of the gang. Even more than most of us, bullies want attention. And fascism, as a political ideology, only affirms that craving.

There is a way, however, to handle bullies, which most of us know: Refuse to give them what they want. What we need, I believe, is a left like that of the Swedes and Norwegians who knew how to refuse what the bullies in their countries wanted.

We can refuse to be baited and manipulated. We can refuse to play their game. After all, we have something better to do: organize campaigns for winnable goals that help build powerful mass movements, so that we can unite those movements behind a positive vision able to push the economic elite aside and open space for a new society.

Many of those attracted to fascist-led formations will see the error of their ways. After all, a nonviolent, democratic society is organized around the common good, satisfying the vast majority.

What about the deeply-convinced haters, unwilling to change? They will scatter to the margins, where they wait with the hope that conditions for their politics will once again become favorable. They serve as a barometer of how things are going, as weâ€™ve seen in Scandinavia recently. Sweden, which has allowed economic inequality to grow more than the other Nordics, is also troubled by more growth in their neo-fascist minority. The Swedish majority is once again challenged, as is that of the United States. Will we confront the real problem of inequality?

My hope for the left, in both countries, is to focus on the fundamental problem, rather than the symptom.Î¦

George Lakey has been active in direct action campaigns for six decades. Recently retired from Swarthmore College, he has facilitated 1,500 workshops on five continents and led activist projects on local, national and international levels â€” most recently with Earth Quaker Action Team. Among many other books and articles, he is author of â€œStrategizing for a Living Revolutionâ€ in David Solnitâ€™s book Globalize Liberation (City Lights, 2004). His 2016 book is Viking Economics, and this month Melville House will release How We Win: A Guide to Nonviolent Direct Action Campaigning. This article appeared on December 20 at WagingNonviolence.