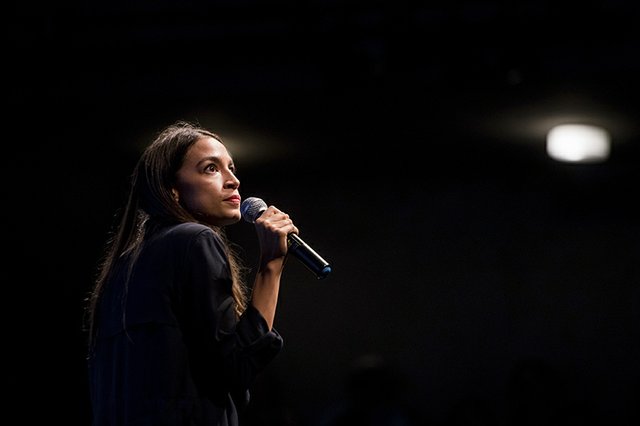 Alexandria Ocasio-Cortezâ€™s â€œGreen New Dealâ€ would not include nuclear energy. Advocates for nuclear could stymie the new
congresswomanâ€™s efforts.

The environmental policy centerpiece of the incoming Democratic House of Representatives is whatâ€™s now known as â€œThe Green New Deal.â€ But itâ€™s already hit deeply polarizing pushback from the old-line Democratic leadership. And it faces divisive jockeying over the future of nuclear power.

The Green New Dealâ€™s most visible public advocate, newly elected twenty-nine-year-old U.S. Representative Alexandria Ocasio-Cortez, Democrat of New York, has laid out a preliminary blueprint advocating an energy economy meant to be based entirely on â€œrenewableâ€ and â€œcleanâ€ sources. According to a report in The Hill, fossil fuels and nuclear power are â€œcompletely outâ€ of her plan.

But on December 20, the Democratic leadership announced it will not support a separate House Committee on the deal. Instead, it will proceed with a panel on climate change, to be chaired by Florida Representative Kathy Castor, who has taken substantial funding from the fossil fuel industry. It remains unclear whether Ocasio-Cortez will even get a seat on the committee.

But the grassroots push for a Green New Deal is clearly not going to go away. The youthful Sunrise Movement has vowed to fight for it, along with a wide range of others, including Senator Bernie Sanders, Independent of Vermont, a likely 2020 presidential contender.

The Green New Deal idea conjures visions of the vast â€œalphabet agencyâ€ programs birthed by Franklin and Eleanor Roosevelt in the 1930s.

In contrast, the Trump Administrationâ€™s promise to deal with â€œinfrastructureâ€ has involved none of the above. While denying the disaster of climate change, its energy policies have focused purely on handing cheap fossil drilling leases on public land (and waters) to Trump cronies.

Itâ€™s also granted a $3.7 billion low-interest loan (added to $8.3 billion previously granted by President Obama) to private developers of the last two U.S. nuclear reactors under construction, at Vogtle, Georgia. Already years behind schedule and billions over budget, the project may soar beyond $20 billion and still never be finished.

The fate of the Vogtle plant underscores a nuclear war that will cut to the heart of the Green New Deal and the climate issue as it plays out in the new Congress.

Already, The New York Times, with its long history of reactor advocacy, has featured an op-ed by U.S. Senator John Barrasso, Republican of Wyoming, advocating more nukes as a solution to the climate crisis. In an article running under a photo of a Chinese reactor under construction, Barrasso argues that â€œnuclear energy is produced with zero carbon emissions.â€

Reactor enthusiasts like Barrasso invariably conjure visions of a â€œnew generationâ€ of small, modular nukes, and other techno-variants like molten salt and thorium, alleged to be safe, cleaner and cheaper that the current fleet. But there are few tangible indications such alternative reactors can come on line anytime soon, or beat the price of wind and solar, which continue to plummet. The criticism that renewables are intermittent is also losing its sting as large-scale battery arrays are also dropping in price while rising in efficiency and capacity.

Barrasso also advocates the continued use of fossil fuels, with various pipeline-related schemes for storing and using the resultant CO2. â€œThe United States and the world,â€ he says, â€œwill continue to rely on affordable and abundant fossil fuels, including coal, to power our economies for decades to come.â€

The Many Challenges Ahead

These pro-nuke arguments are echoed even by some self-proclaimed supporters of the Green New Deal. According to a report from DataforEnergy, principally written by Greg Carlock, at least part of the Green New Deal should be powered by â€œclean sources such as nuclear and remaining fossil fuel with carbon capture.â€

Such rhetoric will be tested by advocates characterizing atomic energy as â€œclean.â€ Their fight for new reactor funding may quickly engulf much of the Green New Deal debate.

So will the struggle over the 98 U.S. reactors still licensed to operate. As they age, they continue to deteriorate and embrittle. Opponents of nuclear power want them shut down before they explode; advocates argue that without them, more fossil fuels will be burned.

But such choices are made in corporate boardrooms, not even by the free market. Pacific Gas & Electric, owner of two aging reactors nearÂ San Luis Obispo, has already admitted that it could replace both with renewable energy while burning no more coal, oil, or gas. If Green New Deal activists are to make a dent in our aging nuclear fleet, theyâ€™ll have to make sure the slew of reactors about to close is replaced by renewables, not the fossil fuels the utilities still own and love.

Finally, along with nuke power, the question of how to fund the deal will be center stage. Mainstream proposals will focus on a new range of taxes.

But outspoken peace groups like Code Pink are eager to move the money out of the military and into the social/infrastructure programs that can rebuild the nation. High-profile campaigns led by activists Jodie Evans and Medea BenjaminÂ were integral to the shocking defection of seven Republican Senators to deny the Trump Administration funding to support the Saudi war in Yemen.

Activists must now argue that the trillion-plus dollars we spend annually on arming the Empire should instead fund those wind turbines and solar panels at the heart of the Green New Deal.Î¦

Harvey â€œSluggoâ€ Wassermanâ€™s prn.fm podcast is Green Power & Wellness. His show, California Solartopia broadcasts at KFPK-Pacifica 90.7FM Los Angeles. His books include the forthcoming The Life & Death Spiral of US History. This article was published on December 27, 2018, at The Progressive.

1 comment for “The Green New Deal Promises Peace and Progress. Will Nuclear Advocates Undermine it?”