By Greg Palast for Truthdig

A one-million-vote nose-dive in turnout was well-concealed by GOP Gov. Brian Kemp to cover up the effects of “Jim Crow 2.O” at the launch his presidential campaign.

From the New York Times to the Wall Street Journal, math-challenged reporters have repeated the completely upside-down fable of a “record turnout” in the Georgia Senate runoff.

Record turnout? My ass! The official count, tucked away in the Georgia Secretary of State’s files, shows the turnout fell by a breathtaking one-million votes. 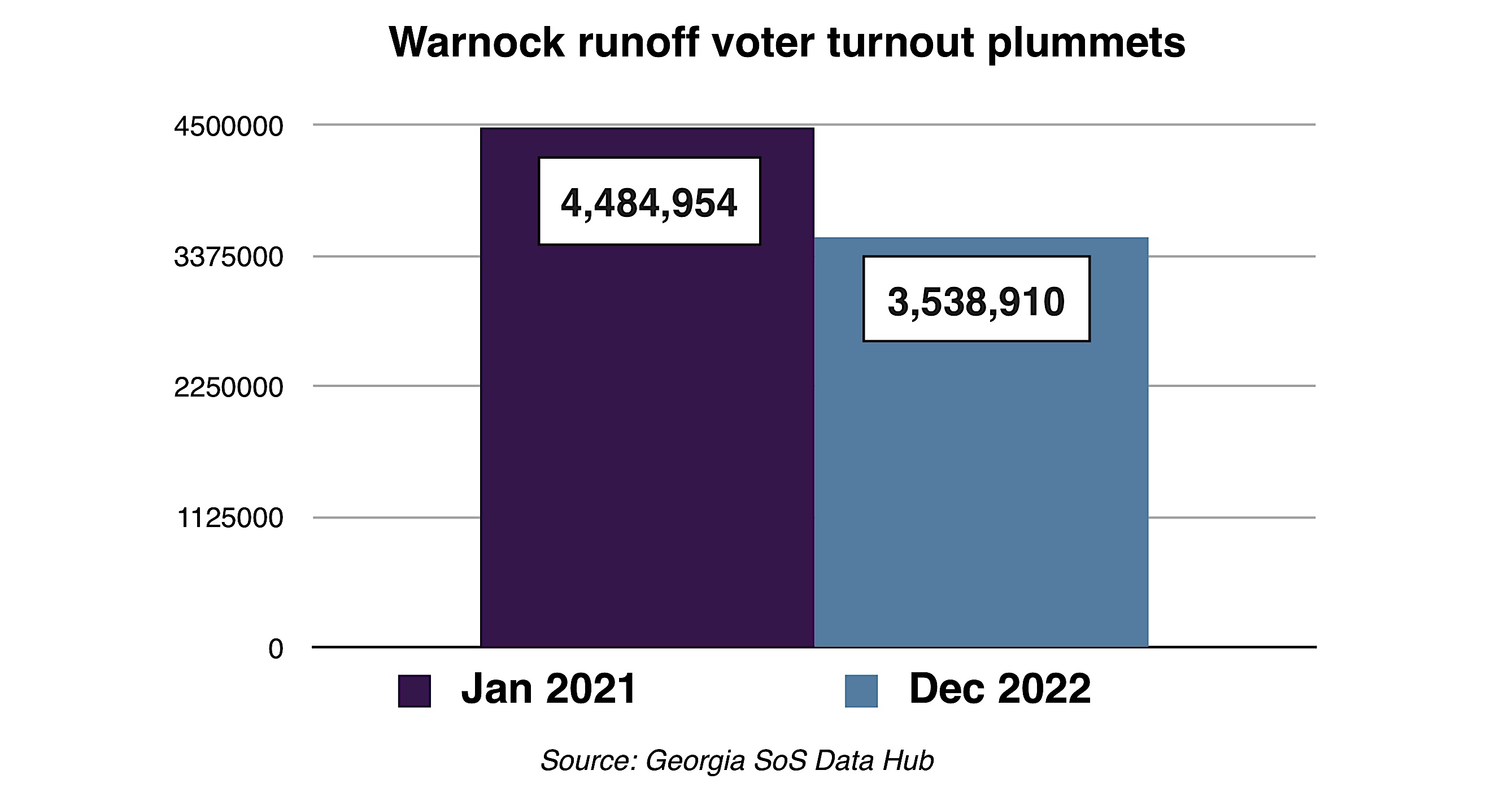 Facts matter. The faux “record turnout” is used by Republican pols to discredit the grossly partisan and racially poisonous effects of SB202, the law signed last year by Georgia’s Gov. Brian Kemp that the NAACP dubs “Jim Crow 2.0” It has become the model for vote suppression legislation already marching into legislatures from Texas to Wisconsin.

But here are the cold, hard facts:

Where did the repeaters (I dare not call them “reporters”) get this “record turnout” canard, this hot steaming load of fact-defying horse-plop?

That propaganda was quoted as gospel in the headlines of virtually every news outlet in America. However, at the very bottom of the Georgia Secretary of State’s self-congratulating press releases is a little link called “Data Hub.” And the data in the hub files tell a very, very different story, a tale of a record fall-off in voting.

Who’s Vote was Lost and Why

Two years ago, a 400,000-vote plurality of mail-in ballots delivered the victory margin for Warnock and his running mate, Jon Ossoff, now Georgia’s other Senator. These “absentee” ballots also won the presidential contest for Joe Biden over Donald Trump for Georgia’s electoral votes.

A stunned Kemp and his GOP-controlled legislature took note and within mere weeks passed SB202, 98 pages of restrictions that made absentee balloting all but illegal, especially in case of another runoff.

Here are some of SB202’s greatest vote suppression hits.

This is a big deal because Kemp’s SB202 also cut the period for the runoff from 60 days to just 28, leaving almost no time for counties to print, send and receive the mail-in votes. (Unlike other states, Georgia requires the ballot be received, not simply postmarked by Election Day, making dropbox access all the more important.)

No, SB202 does not say, “Remove Black voter dropboxes and give them to white voters.” Rather, this new law cutely limits the number of dropboxes to no more than one per 100,000 active voters — a limit that affects only Atlanta.

De’Asia, who only gave her first name, with her toddler, waited in line for two hours to vote on the last day of early voting in Georgia for the Senatorial runoff on December 2, 2022.
Photo: © Zach D. Roberts, 2022

A cruel twist: all dropboxes were removed on Election Day itself, so this reporter watched Atlanta voters wait two hours in line just to hand in their ballots.

And if you needed an absentee ballot, you had to, for the first time, include ID in your request for the ballot though State officials admitted they found not a single fraudulent mail-in ballot in the prior election.

Want more? SB202 bans the traditional Black churchgoers “Souls to the Polls” voting on the Sunday before the election.

Fun fact: SB202 originally limited early voting to just 16 days to avoid something officially called, “State Holiday.” This mysterious “holiday” was known for decades as “Robert E. Lee Day.” Blocking Black voters in honor of the Confederacy was just one Jim Crow jump too far for the courts.

Because not one major news outlet dissented from the myth of the record high turnout, Kemp and his boosters were able to claim that SB202 did not suppress the vote. The Wall Street Journal boasted, “‘Jim Crow 2.0’ Dies Again in Georgia.”

Columbia University law professor Barbara Arnwine, founder of the Transformative Justice Coalition and former Executive Director of the Lawyers Committee for Civil Rights Under Law, told Truthdig she was frustrated by, “this irresponsible media narrative.”

The source? These stories universally relied on the Republican Secretary of State’s press releases, not the official returns. The ABC story and other stories are simply repetitions of Sec. of State Raffensperger’s propaganda, such as the release headlined, “Record Breaking Turnout in Georgia’s Runoff Election.”

True enough, but that’s an artifact of cutting voting days by more than half. If a bank closes two of three teller booths, the line at the remaining booth will set a “record.”

While SB202 made it illegal to hand anyone food or water while in line to vote, voting rights groups improvised, putting free food and ice cream trucks across the street from early voting locations around Fulton County. Photo: © Zach D. Roberts, 2022

Raffensperger also seduced reporters with a claim of “record breaking midterm Early voting.” But this refers only to in-person voting. This minor bump in in-person voting was the result of suppressing the mail-in vote by more than 80% since the last election. Those no longer allowed to vote by mail in 2020 were forced to stand in line, artificially boosting in-person numbers.

While many former mail-in voters reluctantly stood in those hours-long lines, the truth is, as the cold data shows, most simply did not vote.

Nowhere does the state’s mouthpiece reveal, nor does a single major media outlet report on, the horrific one-million vote drop in total turnout.

Raffensperger’s statistical legerdemain led to the dangerously false narrative that SB202 did not suppress the Black and urban vote.

This is flim-flam of the highest order. Crushing 17 days of voting into 7 will create longer lines. On that day Raffensperger cites, every single Atlanta polling station reported lines longer than two hours while white-majority counties reported lines of ten to thirty minutes long.

The danger is that swallowing the politically-infected numbers in the press release leads to the conclusion that, as Kemp said last week in his victory speech over Stacey Abrams:

Rep. Jasmine Crockett of Dallas, a new member of the Congressional Black Caucus, was in Atlanta to personally help hundreds of voters whose ballots were wrongly rejected. The Congresswoman told Truthdig that if the GOP can sell the media and the public on the fraudulent claim it did not impede Black and urban voters, then it’s smooth sailing into Texas — and from there into GOP legislatures hungering for ways to cut the Black vote.

Kemp has the media’s love in his pocket, in part based on the apocryphal story of him refusing Trump’s entreaties to overturn the election. (Even Kemp does not make that claim).

But, with his eye on the White House, he had to be cleansed of the stench of Jim Crow. And so the “record turnout” canard. He bathes in the praise of the New York Times (“The Man Who Neutered Trump”) and already has been endorsed for President by the Wall Street Journal editorial board.

And there is the USA Today trial balloon. USA Today headline, “Brian Kemp 2024? The GOP Georgia governor who stood up to Donald Trump is having a moment.”

CNN commentator Scott Jennings said, “My suspicion is if you dropped someone like that off in Iowa, they’d be quite effective in a retail setting.”

And on Fox News which is desperately hunting for an alternative to Trump, Kemp played coy. Asked whether he might seek the presidency in 2024, Kemp said he had not “ruled in or out anything.”

He most certainly hasn’t.

How did the newsies get it wrong? How did we end up with what Prof. Arnwine describes as, “this irresponsible media narrative”?   How were we jacked with?

Why media missed it is important.  The joke among reporters is that they became journalists because they flunked math.  Unfortunately, the joke’s on us.  Repeating official BS and pundit chatter is fast and cheap; and most readers will never know they’ve been cheated by quickie no-cost “news.”

This is a personal matter to me.  I quit Guardian USA’s elections team when I saw it turn from investigative reporting to imitating the fast-food news found on Fox and NBC. The Guardian report? Georgia?  “Record early voting in runoff for Georgia Senate seat”!

Guess I got out in time.

Greg Palast is known for his investigative reports for The Guardian, BBC Television, Rolling Stone and his string of New York Times bestsellers including The Best Democracy Money Can Buy and Billionaires & Ballot Bandits. His film, “Vigilantes: Georgia’s Vote Suppression Hitmen” was released in October, 2022.

This article was originally published on December 14, 2022, at Truthdig, research contributed by Zach D Roberts

← The “Groundhog Day” Syndrome and Progressive Movements in the U.S.
Bike Libraries Are Boosting Access To Bikes Across The US →